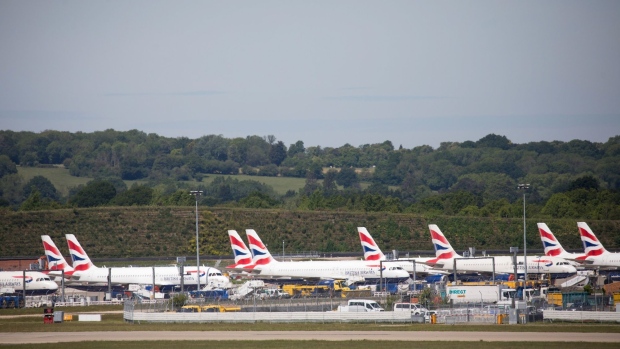 British Airways raised US$750 million in secured loans through a credit facility arranged by Citibank and backed by 48 aircraft as collateral.

The unit of IAG SA pledged 40 Airbus SE narrow-body jets and eight Boeing Co. wide-bodies as part of the deal, according to a filing on the U.K.’s Companies House website.

IAG is scrambling to boost liquidity as fallout from the coronavirus pandemic threatens to depress travel markets for years to come. British Airways has already drawn down existing credit lines and tapped a state-backed lending program, as well as announcing 12,000 job cuts.

The latest fund-raising features planes up to two decades old and is an alternative to sale-and-leaseback arrangements that normally involve newer aircraft. A number of the most modern BA jets such as A321neos and A350s are already leased. The airline and its parent declined to comment.

U.K. rival EasyJet Plc announced earlier that it aims to raise as much as 650 million pounds (US$800 million) by selling and leasing back aircraft.

The BA filing was reported earlier by the Head for Points travel blog.