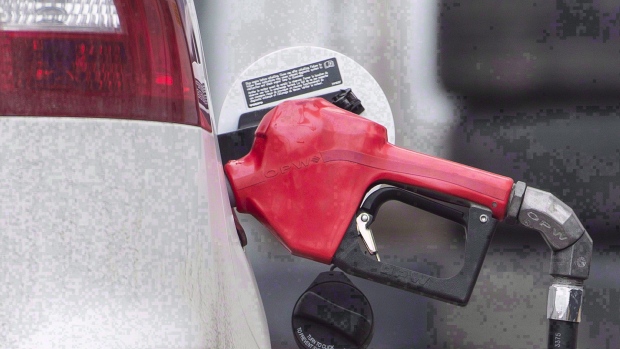 A gas pump is shown at a station in Montreal on April 12, 2017. , THE CANADIAN PRESS/Graham Hughes

Canada’s annual inflation fell in January to its lowest rate in 15 months as gasoline prices declined, giving the Bank of Canada plenty of breathing room on interest rates.

The consumer price index was up 1.4 per cent from a year earlier, down from a 2 per cent pace in December, Statistics Canada reported Friday from Ottawa. That’s the slowest since October 2017. Core measures -- seen as a better gauge of price pressures -- remained at about 1.9 per cent.

The numbers are consistent with a relatively benign inflation outlook for Canada, at a time when the economy is in the middle of a temporary slowdown. The softness gives policy makers little reason to worry that things are overheating. On Friday, Statistics Canada will release GDP data for the final three months of 2018, a report that’s expected to show growth halving to an annualized pace of just 1 per cent.

Most economists expect the central bank, after lifting borrowing costs five times since mid-2017, will stay on hold for the next few months before resuming hikes later this year, as inflation and growth pick up. The Bank of Canada expects inflation will return to near its 2 percent inflation target by the end of this year.

Canada’s dollar remained higher after the report, trading up 0.2 per cent to $1.3143 against the U.S. currency at 8:34 a.m. Toronto time. Two-year government bonds yielded 1.76 per cent, unchanged from Tuesday.

The inflation slowdown to 1.4 per cent in January was in line with economist expectations.

Gasoline prices, which were responsible for a brief spike in inflation last year, are now acting as a major drag. Gas prices fell for a sixth straight month, and were down 14 percent from a year ago.

Prices of goods were actually down from what they were a year ago.

Monthly inflation was up 0.1 per cent in January, in line with economist forecasts Seasonally adjusted, prices were down 0.1 per cent All three measures of core inflation were unchanged: the ‘common’ rate at 1.9 per cent, the median rate to 1.8 per cent and the trim rate at 1.9 per cent A reversal of a December spike in air transportation prices led declines in January. Car prices were the main driver of price gains last month