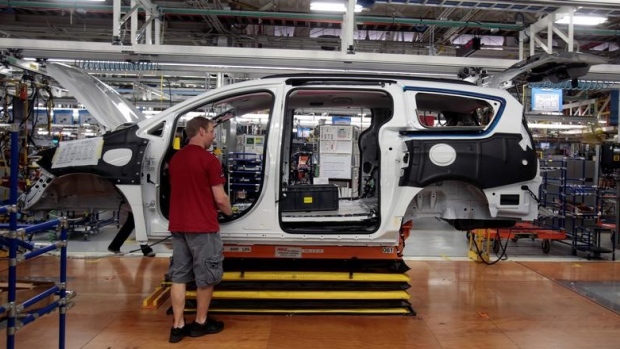 The frame of the all-new 2017 Chrysler Pacifica minivan rolls down the assembly line at the FCA Windsor Assembly plant in Windsor, Ontario, May 6, 2016 , Reuters/Rebecca Cook

The automotive expert expects 2.2 million cars and light trucks were built in Canada, a drop of 200,000.

A CAMI strike at the General Motors plant in Ingersoll, Ont., slowed overall production by 23.4 per cent, with the Chevrolet Equinox dropping significantly towards the end of the year.

On top of that, production of the GMC Terrain has moved to Mexico.

Canada has been losing assembly work to Mexico and the United States that some fear could accelerate with tax cuts south of the border and uncertainty over NAFTA's future.

DesRosiers says future Canadian production will likely be heavily influenced by the sales trends in the U.S. and established shifts in assembly.

The report was released as the Montreal International Auto Show got underway with media unveilings of new cars ahead of Friday's public opening.

Electric vehicles remain a topic of interest with the display of about 40 models just days after Quebec's zero emissions laws formally came into effect.

Quebec Environment Minister Isabelle Melancon says the province will monitor sales but is open to considering increasing the $8,000 rebate, if required.

Ontario led electric vehicle sales for some months last year as its $14,000 incentive attracted buyers despite the higher price compared to gas-powered vehicles.

Electric vehicles accounted for about one per cent of all sales last year.

Magna International says the internal combustion engine will remain dominant for years to come even as electric vehicle sales grow.

By 2025, it expects global electric vehicle sales will account for just six per cent of sales, rising to 13 per cent in 2030.

Toyota Canada announced that Quebec will receive the first Mirai hydrogen cars in the country.