Shoppers Drug Mart sees cannabis and blockchain technology as a perfect combination to get more doctors on board with prescribing the drug to patients in Canada. Ken Weisbrod, Shoppers’ vice-president of business development, said the company signed a deal with TruTrace Technologies for a pilot program to provide software to track medical cannabis from seed to final product. As Canada looks to become a global medical cannabis leader, tools like blockchain will be crucial for legal pot to be traceable and accountable for patients and for practitioners to feel confident about it as a treatment, Weisbrod said.

iAnthus Capital Holdings is walking back plans to issue stock options to its senior executives at a lower rate. The U.S. multi-state operator said 60 per cent of the options that have been issued in 2019 will be cancelled, effective Monday, and that the company plans to reissue them sometime later at a strike price of at least $7.50 a share. Last week, the company offered an apology to shareholders after it decided to cancel stock options on June 6 earmarked for many of its senior executives before issuing new options at a lower price.

Canopy Growth is heading to Colombia. The Smiths Falls, Ont.-based company said Monday it entered into a multi-year agreement with Procaps to sell cannabis-infused softgels and other oil-based products throughout South America. Canopy said it is licensed to produce over 13.6 million square feet of cannabis in Colombia, making its licence there one of the largest in the world. Canopy also said in its update of its international operations that it was granted two medical production licences in Lesotho, acquired 12 hectares of land to begin production operations in South Africa, and that it has begun selling to medical marijuana patients in Australia.

Stifel Financial announced it will buy GMP Capital’s advisory and trading business for about $70 million, a move that should expand the Canadian investment banking firm’s ability to make more cannabis deals south of the border. GMP Capital’s cannabis business has emerged as a significant revenue driver for the firm, which has seen a slowdown in energy and mining activity. GMP made $52.5 million in cannabis and healthcare investment banking revenue in 2018, nearly half of the $122.6 million it made in total investment banking services during that time. “We’ll remain very active in cannabis internationally,” said Harris Fricker, chief executive officer of GMP Capital, in an interview on BNN Bloomberg.

$49,000
-- The amount of first day sales at Choom’s dispensary in Niagara Falls, Ont. which officially opened its doors on June 15. 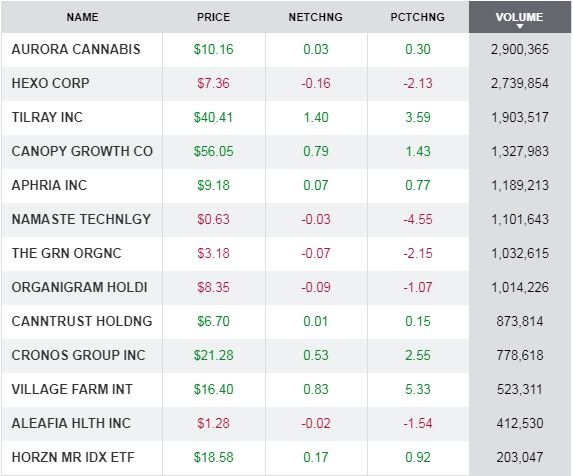