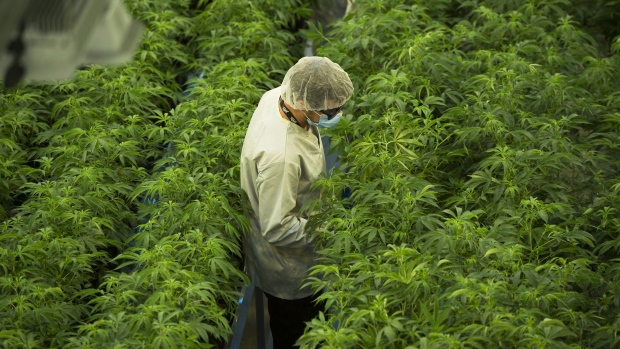 Staff work in a marijuana grow room that can be viewed by at the new visitors centre at Canopy Growths Tweed facility in Smiths Falls, Ontario on Thursday, Aug. 23, 2018. The Canadian Press/Sean Kilpatrick

Canopy Growth Corp. Chief Executive Officer David Klein said he expects the pot giant to be operating in the United States in about a year amid hopes that a Democrat-controlled Congress will pass legislation that would effectively legalize cannabis federally.

"What we really need is some combination of SAFE Banking, a revised Cole memorandum, and a reclassification by the executive branch, all of which … probably happens in the next six-to-eight months anyway," Klein said in an interview. "We're pretty confident we'll be operating in the U.S. a year from now. So, we feel pretty good about that."

On Tuesday, Georgia voters added two more Democrats to the Senate in a special runoff election, meaning its composition is now an even 50-50 split between the two major U.S. parties. However, incoming vice-president Kamala Harris would cast potential tiebreaking votes, giving the Democrats control of the legislative body, in addition to the House of Representatives and the White House.

The Democratic Party has stated its intent to either decriminalize or legalize cannabis and pushed the Marijuana Opportunity Reinvestment and Expungement (MORE) Act through the House last month in a lame-duck session. The expectation is that the bill will be reintroduced and become law sometime in the next year or so.

The SAFE Banking Act, which would allow federally regulated banks and other financial services to conduct business such as lending and accepting deposits with cannabis companies, is also likely to be reintroduced to Congress IN 2021 for a formal vote, analysts said. The Cole memorandum was a document written by Deputy Attorney General James M. Cole in 2013 that said the Justice Department would not enforce federal prohibition in states that "legalized marijuana in some form."

Once passed, it would open the door for Canadian companies like Canopy Growth, Aphria Inc. and Aurora Cannabis Inc. to enter the U.S. market. Most Canadian producers are currently unable to participate in the U.S. industry due to restrictions placed by stock exchange operator TMX Group Inc. forbidding its listed companies from doing business in areas where cannabis is federally illegal.

Analysts say Canopy will have an advantage over its Canadian counterparts in the U.S. since it holds warrants to acquire multi-state operator Acreage Holdings Inc. no later than 60 days after cannabis is federally permissible in the U.S. Canopy also has a 21-per-cent stake in TerrAscend Corp., another major U.S. cannabis player.

"TerrAscend is profitable. Acreage has a really good path to profitability with their new CEO," Klein said

"They have new markets opening up literally over the next couple of months. So, as long as they continue to do that work, we [can] acquire them at the end of the calendar year."

When asked if Canopy had plans to further invest in the Canadian cannabis market, Klein said that he’d consider the right additions, but remains likely to focus his attention on the U.S. market which is roughly nine times the size of Canada’s.

"We're open to them, but they have to be acquisitions that actually add something to our portfolio; from either a product category, or a brand, or something that we're missing," he said. "And there isn't a lot of white space in our portfolio in Canada, to be honest."

The alcohol giant owns 38 per cent of the Smiths Falls, Ont.-based company. Constellation owns warrants in Canopy valued at $50.40 per share that would give it majority control of the firm if exercised before they expire in 2023.

"[Constellation] would like to be in a position to exercise those warrants,” Klein said, adding that the cash that the warrants would bring in would help Canopy compete in the U.S. market.

“Now, we're not quite at the strike price of those warrants yet. So, clearly, they wouldn't do it [presently]."