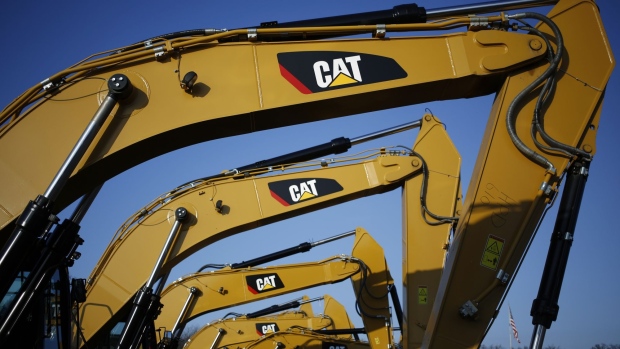 The world’s biggest maker of mining and construction equipment is predicting that the pain from the coronavirus crisis is far from over.

Caterpillar Inc. said the current quarter will be “more significantly impacted” by the pandemic after profits for the first three months of the year trailed analysts estimates. The Deerfield, Illinois-based company also shelved its traditional earnings forecast for 2020 as the fallout from the virus jolts customers in mining, construction and energy.

Caterpillar is taking steps to slash costs and pare production in the face of deteriorating commodity markets that stand to crush demand for the company’s signature yellow machines. BofA Securities Inc. analyst Ross Gilardi downgraded the company’s stock this month, and said that weakness in its energy business was “a problem that is not going away.”

In a stark departure from his normally staid commentary on earnings calls, Chief Executive Jim Umpleby said he never envisioned the significant effects that the virus has imparted on the company’s business thus far.

“The impact of Covid-19 on our business has been significantly more severe and chaotic than any cyclical downturn we had envisioned,” Umpleby said.

“The ultimate impact of the pandemic on our 2020 results remains uncertain, and will be based on the duration of the virus and the magnitude of the economic impact on global demand for our products.”

Shares of the company declined 1 per cent at 10:04 a.m. in New York. The stock had dropped about 22 per cent this year through Monday’s close.

U.S. crude drilling is sliding amid a historic rout in oil prices, Saudi Arabia has started reducing output ahead of the start date for OPEC+ supply cuts, and an immense global surplus means storage tanks are close to capacity around the world.

Chief Financial Officer Andrew Bonfield said in a phone interview the oil and gas business will be “quite challenged” through the rest of 2020, warning that the company doesn’t expect a recovery anytime soon.

Last month, Caterpillar withdrew its earlier 2020 financial guidance and said it would temporarily suspend operations at some facilities as the virus hobbles supply chains.

Less than a week after the company said it would suspend some production, it decided to freeze pay for executives and salaried workers. The manufacturer also confirmed last month that it laid off employees at its East Peoria building KK as part of actions taken to reduce output due to weaker customer demand.

The company said the second quarter will probably be worse than the previous three months as coronavirus-related impacts increase. CFO Bonfield also warned to not necessarily interpret that to mean that this quarter would be the trough of the crisis.

“Confidence is really important for our customers to be able to make sure they can buy machines in whatever segment they are, and that’s going to take a little while to recover,” Bonfield said. “We can’t be sure that’s just in the second quarter and everything goes back to normal in the third quarter.”

Caterpillar got a revolving credit facility of as much as US$3.875 billion last week, indicating that it’s beefing up liquidity amid potential fallout from the pandemic.

Revenue declines in all three main business segments could reach double digits in 2020, according to Karen Ubelhart of Bloomberg Intelligence, and analysts at Morgan Stanley said the decrease in those segments has the potential to continue into 2021.

The CFO struck a slightly upbeat tone about China, where activity is starting to pick back up from February lows. Bonfield said all of its plants in the Asian nation are up and running, the supply chain is working, and that it’s witnessed “some” recovery in April. Though during the earnings call, Bonfield said the company faced competitive price pressures during the first quarter in the country.