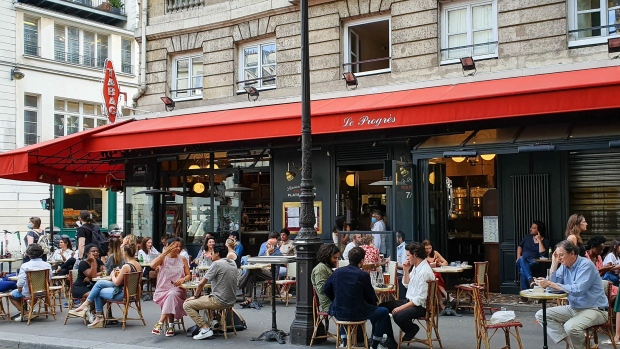 (Bloomberg) -- All of Paris’s neighborhoods are like characters unto themselves, much like the residents that call them home—and perhaps none more so than the Marais. Its narrow, gaslit streets still look the way they did in Henry IV’s days, when the Good King made the neighborhood his aristocratic playground. And yet the area has for decades doubled as the hub of all things young and cool in the City of Light: a long-running gay district, and home to whatever next-big-thing Paris might have, be it rising creatives and their designer boutiques, busy neo-bistros, or thumping nightclubs.

Despite that enticing mix of old and new, the Marais has consistently lacked great hotels. The neighborhood’s architecture—a patchwork of low-rise townhouses and storefronts—poses a challenge for large hospitality brands, which generally favor grand maisons that make for more attractive conversion projects. Independent hotels that crop up tend to have limited amenities, thanks to those narrow floor plans. So for most travelers, staying in the Marais has been possible only if you were willing to give up the creature comforts of Paris’s excellent hotels or were looking for an Airbnb. Not anymore.

With its 61 rooms and suites decorated with Parisian antiques and custom furniture and lighting, Le Grand Mazarin will offer travelers a much-needed luxury option when it opens in October. The Martin Brudnizki-designed hotel connects three historic structures—one of which was for years a three-star hotel—along Rue de la Verriere. Brudnizki imagined the project as the fictionalized postwar home of an eclectic Marais local, stitching together a series of intimate residential-style spaces, from the reception area lined with moire silks to the rooftop pool and spa, both adorned with hand-painted murals. On the first floor, a restaurant will take inspiration from the Jewish communities that settled in the neighborhood during the 16th and 17th centuries, combining Israeli and French flavors.

“The Marais has a delicious mix of boldness, flamboyance, and elegance,” says Kimberley Cohen Pariente, who helped bring Le Grand Mazarin to life as artistic director of her family’s Maisons Pariente hospitality brand. “It has this value of authenticity mixed with modernity,” adds Leslie Kouhana, Cohen’s sister and the brand’s president. “Watching it evolve over the years has been nothing short of magical.”

Although Le Grand Mazarin will be the district’s first true five-star property, it builds upon a series of recent openings of increasingly luxurious establishments. Nearby, in a former convent, the Hotel Sookie opened last summer with 31 stylish, if pint-size, rooms. Original architectural details including the carved wooden staircase have been faithfully restored and paired with earthy, textural décor that’s big on natural materials such as bamboo, stone, and wood. There’s no restaurant, but the on-site coffee shop makes up for it with fluffy homemade cinnamon rolls, classic chocolate babkas, and, come evening, an all-French selection of wines and Champagnes.

And French brand Evok’s Cour des Vosges, hidden away in a 17th century mansion on the edge of the Place de Vosges, is a discreet oasis. It eschews the standard lobby and doubles down on privacy, with only 12 roomy suites that have canopy beds and loads of literature and original art. The round-the-clock room service features seasonal creations from pastry chef Yann Brys—flaky apricot tarts and sweet calisson candies among them. The Roman bath and spa in the basement remain a well-guarded local secret; the treatments feature products from Swiss brand La Colline.

Add the neighborhood’s first hotel from a major hospitality chain, Accor’s SO/ Paris, slated to open on Sept. 1, and suddenly the Marais is a hotel hotbed. The 162-room property will be more buttoned-up, with staff dressed by Guillaume Henry, a spa from Codage Paris, and original artworks from Thomas Fougeirol and Olafur Eliasson. Its location in the recently completed multiuse development Morland Mixité Capital—a sleek revitalization project that’s bringing workspaces, apartments, and a food market to a dilapidated old office complex—is part of a new vision for the Marais that, for better or worse, is changing the historic district’s architectural makeup.

Now that you have a place to stay, here’s a little black book of the district’s latest hot spots.

Baobar: Behind a glowing pink façade on Rue Sainte-Croix de la Bretonnerie, this pan-Asian counter slings bao buns of every kind: classic pork, vegetarian, even dessert bao, fried and filled with black sesame or matcha ice cream. Everything is served fast and fun out of the open kitchen, including the dim sum and spicy fried chicken. A collection of natural wines and sakes lines the neon-lit shelves on the walls.

Tekés: “Tekés” means “ceremony” in Hebrew, and the word is taken very seriously by the creators of this new vegetarian restaurant. Described as an “ode to plants and to the ancestral cooking methods of Jerusalem,” the menu is a nod as much to the homeland of chefs Assaf Granit and Cécile Lévy as it is to the post-revolution Jewish communities of the Marais. The duo pulls off the homage in a wholeheartedly celebratory manner, serving family-style beetroot shawarma and mushroom-based foie de volaille from earthen tableware.

Ganni: The Marais was a natural fit for the first French location for the cult Scandinavian fashion brand Ganni. Since its inception in 2000, the Danish label has dominated cool-girl style with its colorful, retro looks. The new flagship opened in March on Rue Vieille-du-Temple with interiors painted pink and yellow to match an eclectic collection of combat boots, pastel knits, and vibrant tees, along with graphic wall tapestries designed by German artist Desire Moheb-Zandi.

Safe Urban Concept: If you’ve ever dreamed of getting a tattoo, drinking free-trade coffee, and shopping sustainable fashions all at the same place, this new hybrid concept shop is the place for you. Safe Urban Concept does do-good commerce to the nth degree, promoting local-only brands such as genderless streetwear label Common Paris and all-natural skin-care company La Crème Libre in a rough-around-the-edges eco-friendly gallery. The shop also doubles as a community space for pop-up art exhibits and free workshops, such as a recent roundtable discussion about the effects of social media on notions of beauty and mental health.

Musée Carnavalet: The Marais’s longtime museum devoted to the history of the city of Paris reopened in 2021 after a five-year, $60 million renovation. The work focused on restoring the institution’s historic mansions, as well as creating new galleries to exhibit countless never-before-seen artifacts and better connect the city’s history, from a collection of Gallo-Roman ruins dating to the 1st century to Henri Cartier-Bresson’s iconic street photography of the 20th century. The museum is also home to a new fine-dining restaurant, Fabula, run by Top Chef France contestant Thibaut Spiwack.

Maison Suisen: Designed as a traditional ryokan with a burnt-wood façade, this new Zen spa is unapologetically authentic to its Japanese roots from the get-go, welcoming guests at the entrance with slippers and jinbei (kimono-style leisure sets). Shiatsu massage, acupuncture, and other Eastern therapies are performed in treatment rooms with bamboo ceilings, fusuma (sliding doors), and washi (paper lanterns). Even a quick visit to the tearoom, which specializes in medicinal green and herbal teas, is immersive enough to make you forget whether Mt. Fuji or the Eiffel Tower is just outside.

Stella Pardo: In 2020, French-Peruvian designer Cinthya Guerrero chose the Marais for her label’s first ever brick-and-mortar location. Opened in 2020, the shop is a showcase for puffy alpaca sweaters ethically sourced from a community of weavers in Lima; grandma-chic crocheted dresses and bags; and a prevailing hippie vibe thanks to vintage furniture and textural shades of beige throughout.

Merci: This three-story concept shop has been open for more than a decade, but its ever-evolving roster of designers and artists keeps it fresh even for the locals who frequent it weekly. Shop funky lamps and linen bedspreads, tableware and skin care—almost all of which come from French designers. And don’t leave without a Merci tote or T-shirt; they are hallmark pieces that unite all the in-the-know denizens of the Marais.