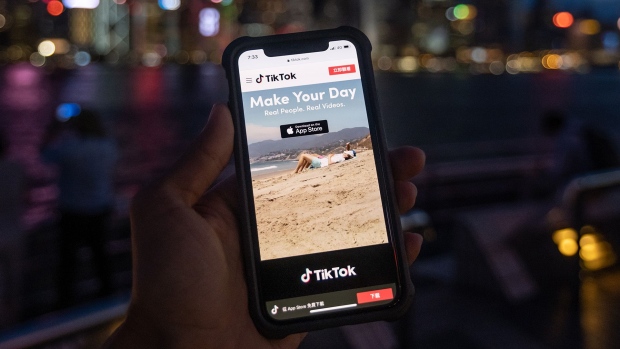 The website for ByteDance Ltd.’s TikTok app is arranged for a photograph on a smartphone in Hong Kong, China, on Tuesday, July 7, 2020. TikTok will pull its viral video app from Hong Kong's mobile stores in coming days, becoming the first internet service to withdraw after Beijing enacted sweeping powers to crack down on national security threats. Photographer: Roy Liu/Bloomberg , Photographer: Roy Liu/Bloomberg

(Bloomberg) -- China’s ByteDance Ltd. is prepared to sell 100% of TikTok’s U.S. operations as a way to head off a proposed ban on the music-video site by President Donald Trump, said two people with knowledge of the situation.

Details of the proposed transaction weren’t immediately known after the parties worked through the night to find an acceptable resolution. The White House had no immediate comment.

Trump said late Friday he plans to ban TikTok from the U.S. following concerns about data collection by the popular app, and suggested a move could come as soon as Saturday.

ByteDance is now waiting on the administration to approve Microsoft Corp.’s potential acquisition of TikTok, said one person, who wasn’t authorized to speak publicly about the matter.

A deal would give the software company a popular social-media service and relieve U.S. government pressure on the Chinese owner of the video-sharing app -- although Trump seemed to throw cold water on the plan in his remarks on Friday.

Microsoft’s move is “not the deal that you have been hearing about, that they are going to buy and sell, and this and that. And Microsoft and another one. We’re not an M&A company,” Trump told reporters aboard Air Force One.

In a statement on Saturday, a TikTok spokesperson pushed back on suggestions it’s harvesting data from U.S. users.

“TikTok U.S. user data is stored in the U.S., with strict controls on employee access. TikTok’s biggest investors come from the U.S.,” the spokesperson said. “We are committed to protecting our users’ privacy and safety.”