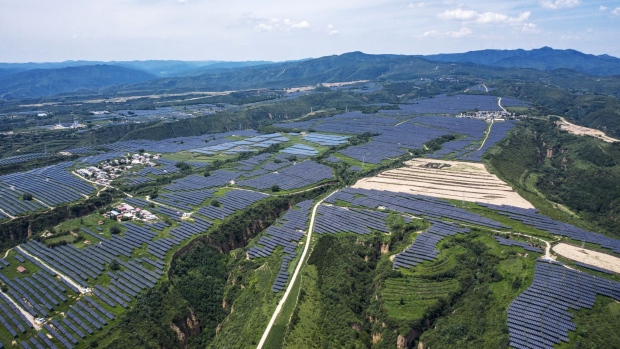 (Bloomberg) -- China may bar solar developers from building panels on farmland as the government weighs the importance of food security against its clean energy goals.

Three ministries including the National Energy Administration are circulating for comment a draft proposal that would make forests and cultivated farmland off-limits for solar development, industry media Polaris Solar Network reported on its WeChat account, citing a copy of the document. Phone calls to the NEA’s office on Friday went unanswered.

The proposal would still allow solar panels on some agricultural areas, such as land used for farming equipment or buildings. It also encourages development of unused land, like the massive solar-and-wind farms being built in the Gobi desert.

The national proposal follows provincial efforts to keep renewable power away from productive farmland. Henan province in early June restricted wind and solar to plots that are considered “unstable” and aren’t used permanently for crop-growing. Shandong officials in November stopped accepting applications for permits to build solar panels on farmland.

China is the world’s leader in shared land use between solar power and farming, a field known as agrivoltaics. It accounted for more than two-thirds of the 2.8 gigawatts of such capacity that was installed worldwide at the end of 2020, according to the Fraunhofer Institute for Solar Energy Systems ISE in Germany.

In addition to the NEA, the proposal was issued by the Ministry of Natural Resources and the National Forestry and Grassland Administration. The proposal was dated June 15 and it’s unclear when the deadline for comments falls.