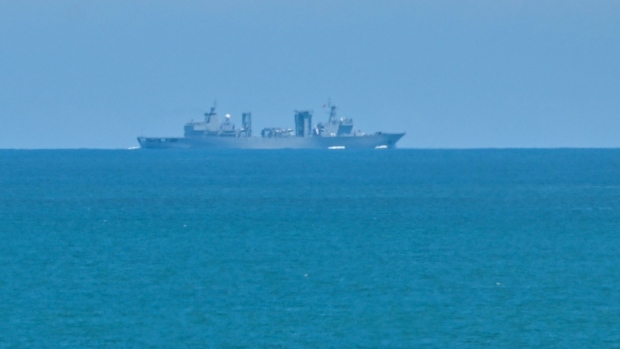 (Bloomberg) -- China’s military said exercises held around Taiwan in response to US House Speaker Nancy Pelosi’s visit had concluded, while pledging to continue regular patrols near the island.

Still, the PLA planned to “regularly organize patrols in the direction of the Taiwan Strait,” Shi said, adding that such activities would be based on the development of the cross-strait situation. The remark held open the possibility of frequent Chinese military operations across the US-drawn median line that divides the waterway.

“I think the idea here is for China to maintain a presence around Taiwan’s main island,” said Ridzwan Rahmat, a principal defense analyst at Janes. “Such announcements may be a form of pressure on Taiwan. They could be conducting low-tempo exercises, such as maritime patrols and search-and-rescues. These are naval exercises too, but do not involve any live firing.”

The exercises held in the wake of Pelosi’s visit represent some of China’s most provocative actions toward Taiwan in decades. Not only did the PLA test-fire 11 missiles into the surrounding seas -- including four likely launched over Taipei -- Taiwan accused it of rehearsing possible invasion scenarios.

The PLA statement confirmed what shipping firms and other industries that move people and goods in and out of Taiwan had already deduced -- that the most disruptive drills had ended days ago. As of Wednesday, ships traveling to and from Taiwan’s ports had largely resumed previously planned routes.

“The extended drill seems less intensive than the previous ones and the shipowners don’t seem afraid to pass through the affected areas, at least for now,” Emma Li, a China market analyst at Vortexa Ltd., said before the PLA’s statement. “Tanker or bulk ships are just running as normal.”

Still, Chinese President Xi Jinping has already used the crisis to shrink a vaguely defined buffer zone that has kept the peace around Taiwan for decades. More than 160 Chinese warplanes operated east of the Taiwan Strait’s median line over a seven-day period ending Tuesday, once a rare event.

The promise of more patrols will likely fuel concerns that Xi will seek to make such incursions the new status quo. The strategy places greater pressure on US President Joe Biden to craft a response that encourages China to pull back without escalating tensions further.

On Monday, Biden expressed confidence that China would not escalate tensions further with Taiwan. “I’m not worried, but I’m concerned that they’re moving as much as they are,” he said. “But I don’t think they’re going to do anything more.”

Xi might be seeking to lock-in his strategic gains without cutting off relations with Biden, who had been discussing a face-to-face summit between the two presidents before Pelosi’s trip to Taipei. On Friday, China suspended a series of climate and military negotiations between the two sides, without closing the door on further high-level talks.

Separately, the Taiwan Affairs Office in Beijing published a white paper blaming Taiwan’s democratically elected leaders for increasing the risk of war by refusing to accept that both sides belong to one China. Beijing has traditionally sought to punish the leadership in Taipei for efforts to woo support from Washington.

Taiwanese President Tsai Ing-wen dismissed the report and its plans for unification as “wishful thinking” that disregarded reality. “The Taiwanese people want peace. We are not provocative, not escalating tension, but we will not give in in terms of safeguarding sovereignty and national security,” Tsai said.

Xi must project strength ahead of a Communist Party congress later this year in which he is expected to secure a precedent-breaking third term as leader. While pushing back against perceived US interference may assuage hardcore nationalists at home, it could also distract from Xi’s efforts to stabilize a slowing economy.

“China needs to ensure stability before the 20th Party Congress, and that’s why it is trying to calibrate the scope and frequency of military maneuvering around Taiwan,” said Michael Raska, an assistant professor at Nanyang Technological University’s S. Rajaratnam School of International Studies in Singapore. “For now, they will tone it down to patrols, but they can bring back more military pressure anytime.”