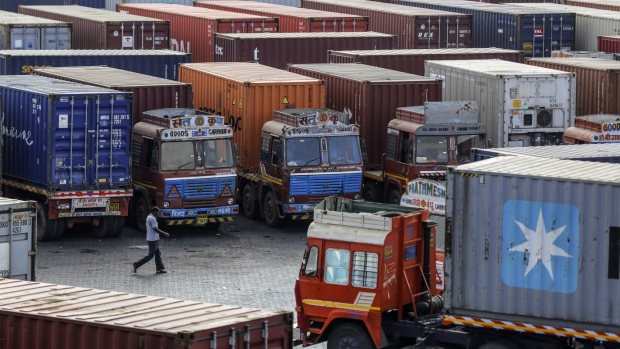 Container trucks sit parked near the Jawaharlal Nehru Port, operated by Jawaharlal Nehru Port Trust (JNPT), in Navi Mumbai, Maharashtra, India, on Saturday, May 25, 2019. President Donald Trump opened another potential front in his trade war on May 31, terminating India's designation as a developing nation and thereby eliminating an exception that allowed the country to export nearly 2,000 products to the U.S. duty-free. Photographer: Dhiraj Singh/Bloomberg , Bloomberg

(Bloomberg) -- Imports from China have been piling up at Indian ports pending government clearances, causing concern that a recent border standoff between the two nations could have an economic fallout that will disrupt supply chains.

From active pharmaceutical ingredients that go into the world’s most-consumed drugs to the innards of popular mobile phones, Indian companies purchase Chinese raw materials that feed their finished products. These consignments are now being delayed and firms aren’t sure why.

“Customs authorities have not been clearing consignments coming from China, and they haven’t been offering any reasons,” Dinesh Dua, chairman of India’s Pharmaceutical Export Promotion Council, said by phone. “It has been five days now. We have no source apart from China.”

Dua, who’s also chief executive officer of Nectar Lifesciences Ltd., said he has written to the ministries responsible for pharmaceuticals and trade to seek help as companies are spending about 350,000 rupees ($4,630) a day in demurrage charges. Similar concerns are being voiced by electronics manufacturers, along with anxiety about how they will run their factories, only recently reopened after India’s lockdown to contain the coronavirus.

“Five consignments of mine are stuck,” said Sudhir Hasija, chairman and founder of Karbonn Mobiles, which builds smartphones, chargers and set top boxes. “The government collected customs duty and GST on them. 100% of the inspections are done. Now I’m told they are waiting for release instructions, from whom I don’t know. I haven’t received any communication.”

Businesses worry that they may end up becoming the casualty of a brewing trade war between the Asian giants sparked off by a border clash that killed 20 Indian soldiers and left an undisclosed number of Chinese dead. India plans to impose stringent quality control measures and higher tariffs on imports from China, people with the knowledge of the matter have said. India on Monday banned 59 Chinese apps, citing threats to its sovereignty and security.

Stopping imports from China at domestic ports will lead to losses for those Indian businesses that placed orders before the border clashes, Nitin Gadkari, Indian minister for Micro Small and Medium Enterprises, told Quintillion Media on Sunday. Gadkari said his ministry is actively working with the finance and commerce ministries to resolve this issue.

Yogesh Baweja, a spokesman for the commerce ministry, declined to comment when called by Bloomberg News while Rajesh Malhotra, who represents India’s Finance Ministry, didn’t answer a call outside office hours in New Delhi on Monday.

At least six companies from across India have been affected by the delays, according to Daara Patel, secretary general of the Indian Drug Manufacturers Association that represents small- and medium-sized Indian pharmaceutical manufacturers. Firms are “quite anxious and concerned about the attitude of the clearing agencies across the country,” he said.

The Society of Indian Automobile Manufacturers warned in a statement that the congestion at ports could hurt manufacturers. Karbonn’s Hasija said freight forwarders are refusing to lift more material from China because they don’t have space to store the shipments.

Pankaj Mohindroo, chairman of the India Cellular and Electronics Association, which represents companies such as Apple Inc. and Micromax Informatics Ltd., said the industry body is in talks with the government to resolve the situation.

“We have been assured that the government does not want any disruption in these trying times,” he said, “and all actions will be taken in the interest of the industry and nation.”