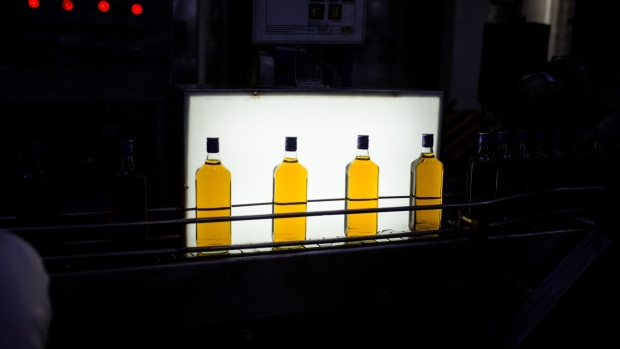 Bottles of White Castle Whiskey move along a conveyor on a production line at the Destileria Limtuaco & Co. bottling plant in Manila, the Philippines, on Tuesday, July 16, 2019. As Philippines distillers face a raft of challenges at home, Destileria Limtuaco is looking overseas for growth. It plans to add export markets that now include China, Japan, Taiwan, South Korea, Malaysia and Thailand. Photographer: Geric Cruz/Bloomberg , Bloomberg

(Bloomberg) -- China suspended the import of alcoholic beverages from certain Taiwanese companies, the latest to get hit amid elevated political tensions.

Taiwan has asked Chinese authorities for reasons behind the decision, the island’s finance ministry said in a statement. Producers affected include the state-owned Taiwan Tobacco & Liquor Corp., Legend Brewery, Yunshan Distillery and Taihu Brewing, according to Taiwan’s official Central News Agency. China also halted imports of some other beverages, including Uni-President Enterprises Corp. products, according to Taiwan’s Next Apple News website.

Beijing has scaled back purchases of Taiwanese products as it seeks to punish the island’s democratically elected government for increasing ties with the US and its allies. While food made up a tiny fraction of Taiwan’s more than $328 billion of two-way trade with China last year, it’s one area where Beijing can find alternative sources, in contrast to semiconductors from Taiwan’s technologically advanced manufacturers.

In the wake of US House Speaker Nancy Pelosi’s visit to Taipei in August, China said it would suspend imports of some fish and fruit from the island.

--With assistance from Debby Wu.

(Updates with statement from finance ministry in second paragraph)