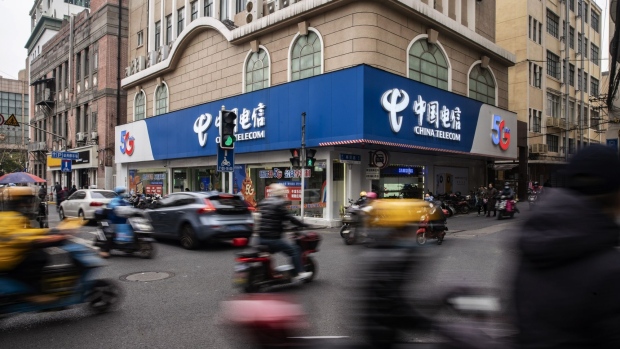 (Bloomberg) -- Half a year after being booted off the New York Stock Exchange, China Telecom Corp. has received regulatory approval for a primary share sale in Shanghai that is set to be the world’s biggest so far in 2021.

The plan to raise 54.4 billion yuan ($8.4 billion) on the mainland comes as rising tensions with the U.S. drive Chinese companies back to their local equity markets. China Mobile Ltd., which the NYSE delisted at the same time, is also seeking to sell stock in Shanghai.

It is already a bumper year for share sales on the mainland, with announced primary deals of 281 billion yuan, according to data compiled by Bloomberg. Tighter rules in China on overseas listings and President Xi Jinping’s push to elevate mainland markets are adding to the momentum.

“Chinese companies coming home will be a trend given the current political tensions between U.S. and China and tightened regulatory rules,” said Dickie Wong, executive director of research at Kingston Securities (Hong Kong) Ltd. The trend “is likely to be very strong in the short and long term, or even forever,” he said.

While China Telecom’s share sale - which has yet to price - is likely to be the biggest this year when it takes place, it may not be for long. Syngenta Group, the Swiss seed and fertilizer business owned by China National Chemical Corp., is seeking to raise 65 billion yuan in a Shanghai listing later in the year.

China Mobile, China Telecom and China Unicom Hong Kong Ltd., which was also banned in the U.S., are all listed in Hong Kong. They fell afoul of the NYSE in January on national security grounds as a result of an initiative by then-President Donald Trump to ban investments in firms linked to the Chinese military.

“High-growth companies are left with no choice but to list in the mainland or Hong Kong,” said Steven Leung, executive director at UOB Kay Hian (Hong Kong）Ltd. “More companies choosing the A-share market may mean more capital funded out of Hong Kong shares,” he added.

This possible challenge for shares in Hong Kong could add to pressure on the Hang Seng Index, which has erased gains made earlier this year. China Mobile and China Unicom are members of the city’s stock benchmark.