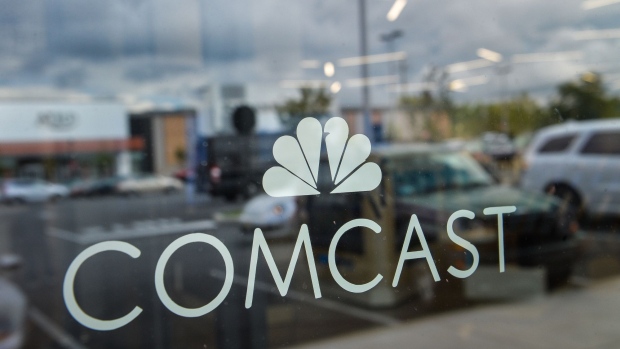 Signage is displayed in the window of a Comcast Corp. Xfinity store in King Of Prussia, Pennsylvania, U.S., on Tuesday, July 25, 2017. Comcast Corp. is scheduled to release earning figures on July 27. Photographer: Charles Mostoller/Bloomberg , Bloomberg

“He’s no longer representing us as an outside lobbyist,” a Comcast spokeswoman said Monday by phone, without elaborating.

Schlapp is chairman of the American Conservative Union and a principal of Cove Strategies, an organization that’s aligned with Republican politicians. In early June, he accused Black Lives Matter of being “hostile to families, capitalism, cops, unborn life and gender.” Last week, Abbott Laboratories announced it was cutting ties to Schlapp, according to Crain’s Chicago Business. On Fox News, he was also critical of groups seeking to remove historic statues that they find offensive.

According to Popular Information, Schlapp had a lobbying contract until April 2017 with the Motion Picture Association, whose members include Comcast’s Universal Pictures and Walt Disney Co. After that, the MPA continued to support him through the ACU. The organization donated $175,000 to the ACU, according to tax filings obtained by Popular Information.

Schlapp defended his work on behalf of people of color in a tweet Tuesday, citing his advocacy for criminal-justice reform legislation and saying he has kicked white nationalists out of his group’s annual conference. “Under my leadership ACU’s record working toward equality for Black Americans is without question,” he said.

(Updates with twitter comment in last paragraph. The name of Black Lives Matter was corrected in the headline of an earlier version of this story.)