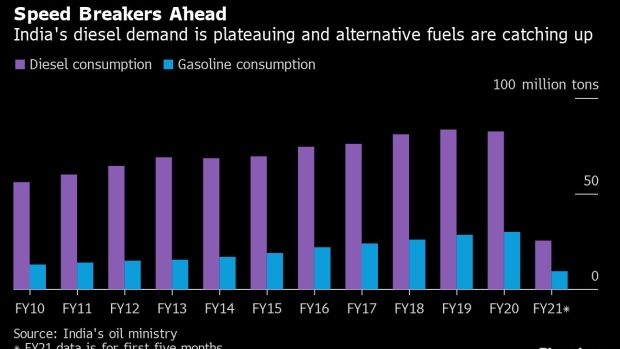 Trucks are parked near a wholesale market in Delhi, India on Sept. 4. , Bloomberg

(Bloomberg) -- For decades, diesel has underpinned India’s economic growth and the fortunes of its refiners, but the pandemic has caused the nation’s most consumed fuel to lose some of its luster.

Since Covid-19-lockdowns have eased across India, diesel consumption has trailed the rebound in gasoline with trucks remaining idle amid a softer economy. Motor fuel use, however, has benefited from people choosing their own cars and scooters over public transport to avoid the risk of infection.

While diesel is still king in India -- fuel sales are double that of gasoline -- the uneven demand recovery has created a unique challenge for India’s refiners, just as more headwinds emerge from the use of hydrogen and natural gas in major guzzlers such as trucks and buses.

“Personal mobility over public transport has supported gasoline, but diesel is getting knocked-out across the sectors,” said Senthil Kumaran, head of south Asia oil at industry consultant FGE. “It’s a structural shift in trends that we are witnessing. The refining system is caught at the crossroads, but it will gradually adjust to the change.”

Refiners are expected to focus on making less diesel and more gasoline and petrochemicals to respond to changing demand. Reliance Industries Ltd. has flagged a shift away from transport fuels, while Indian Oil Corp. has signaled greater diversification to reduce its dependence on its fuels business. The country’s biggest processor also plans to roll out a fleet of buses powered by a blend of hydrogen and compressed natural gas.

Indian Oil Corp.’s foray into hydrogen-powered public transport follows a push by the government encouraging the use of cleaner fuels for buses and trucks, which consume more than half of the nation’s diesel. The railway that moves millions of people a day around the country is also getting somewhat greener, with the country seeking to convert its entire network to run on electricity by 2024, rather than diesel, according to railways minister Piyush Goyal.

The price advantage of once cheap diesel has also faded. The fuel now costs almost as much as gasoline in some Indian states after being saddled with new taxes over the past six years, prompting some farmers to come up with novel alternatives such as liquefied petroleum gas to run water pumps. Farms account for more than eighth of total diesel consumption in India.

Gasoline sales in September rose for the first time since February on a year-on-year basis as more people opted for their own vehicles to commute. While diesel consumption is lagging and not expected to rebound from the impact of the virus until year-end, Indian Oil Corp. Chairman Shrikant Madhav Vaidya sees demand for the fuel enduring for at least another couple of decades.

“There’s a huge appetite to consume more energy,” he said. Transport fuels will continue to dominate until at least 2040, he added.