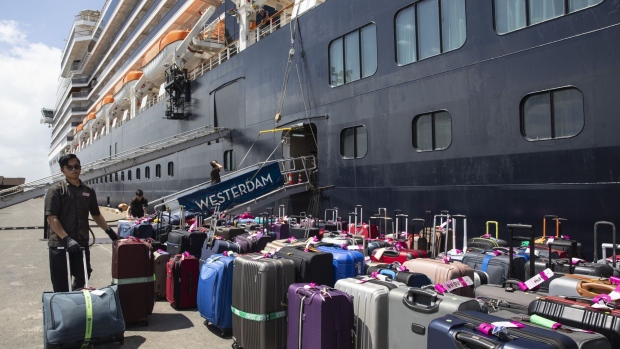 SIHANOUKVILLE - FEBRUARY 14 : Cruise passengers luggage gets unloaded from the MS Westerdam cruise ship after being stranded for two weeks, now docked on February 14, 2020 in Sihanoukville, Cambodia. The ship is completely free from the Coronavirus (COVID-19.) but was turned away from five other Asian ports, it departed Hong Kong February 1st with 1,455 passengers and 802 crew on board. Another cruise ship is in quarantine in Japan with more than 200 infections. The Coronavirus cases rise to more than 64,000 people, total number of deaths is approximately 1,383. (Photo by Paula Bronstein/Getty Images) , Photographer: Paula Bronstein/Getty Images AsiaPac

(Bloomberg) -- A number of passengers, including two Dutch citizens, were denied boarding for an Amsterdam-bound KLM flight departing from Kuala Lumpur, according to the Dutch foreign ministry.

The travelers were among the more than 2,200 passengers and crew on the Westerdam cruise ship, which was turned away by five ports before disembarking in Cambodia. An 83-year-old American passenger was diagnosed with the coronavirus a day after she left the ship.

The tourists who were kept from boarding KLM flight 810 are still in Malaysia, along with another group of Dutch citizens suspected to have had contact with the infected American woman. Dutch RIVM National Institute for Public Health and the Environment estimated that 11 people weren’t allowed on the plane.

A number of Dutch citizens who were aboard the Westerdam have already returned to the Netherlands, where they will be monitored daily by local health authorities.

Ninety-one Dutch citizens were aboard the Holland America Line cruise liner, a spokesman for the RIVM said by phone. He couldn’t confirm the number of Dutch passengers who had already returned to the Netherlands.

To contact the reporter on this story: Wout Vergauwen in Amsterdam at wvergauwen@bloomberg.net