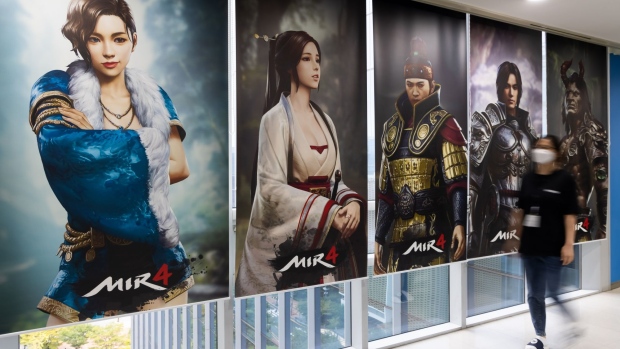 (Bloomberg) -- When a twenty-something Park Kwan Ho created the Legend of Mir more than two decades ago, he was driven mostly by his love for online gaming. Money was the last thing on his mind, says the shy, first-generation South Korean developer.

Now at 48, the one-time game hobbyist is finally starting to taste the financial success that’s eluded him since he founded Wemade Co. in 2000, thanks to the release of Mir’s fourth iteration globally in August.

Based on blockchain technology, Mir4 allows online players to convert in-game assets into tradable crypto coins, while their avatars hunt and battle in the virtual world. While this genre is termed play-to-earn, many users also spend money to avoid hours of “grinding” to gain the resources needed to start earning crypto.

Mir, based on quests that players have to accomplish in a mythical world of monsters and warriors, has drawn millions of users logging in from countries from Belgium to Brazil and the Philippines.

Shares of Wemade have surged almost 620% this year, giving the company a market value of about $3.9 billion. Park is among a growing crop of developers seeking to reshape an industry that’s seeing massive wealth creation as the pandemic fuels demand for online entertainment.

Mir4 is part of the flood of South Korean entertainment content to have captured a wider global market, adding to the country’s soft-power credentials. The latest is “Squid Game,” a Netflix megahit about indebted people in a deadly contest for a cash prize.

Park’s 45% stake in Wemade is worth about $1.7 billion. But almost 70% of Park’s shares are pledged as collateral, according to a filing on Sept. 23. That means, according to the Bloomberg Billionaires Index, he’s not yet part of South Korea’s pantheon of self-made gaming billionaires such as Krafton Inc.’s Chang Byung-gyu and Netmarble Corp.’s Bang Jun-hyuk.

Out of the 14.8 million shares Park holds, 10.3 million were pledged between 2013 and 2020 with Industrial Bank of Korea, NongHyup Bank, IBK Securities Co. and Samsung Securities Co. A representative for Wemade said the collateral only amounts to 45 billion won ($38 million), but declined to comment further.

Leveraging listed assets is a common way to access cash without selling stock. Billionaires including Elon Musk and Larry Ellison rely on the technique to help obtain personal loans or fund their lifestyles. It offers significant tax advantages and lets them benefit from the upside in the stock. Risks, however, include the need to meet margin calls when markets plunge.

As a business major in college in the mid-1990s, Park used to develop computer games as a member of a programing club. At the time, the gaming sector didn’t hold much prospect for a lucrative career. Despite warnings from friends, Park remained undaunted.

“I was pretty good at programming and coding, so I thought maybe it’d be fun to make a career of it,” Park, who hasn’t spoken to the media for at least a decade, said in a rare interview. “Initially, I didn’t have any plan to start my own company.”

When Wemade released the second version of Mir in China in the early 2000s, it managed to sign up 500 million players at one point. But in subsequent years, the company stumbled as it got embroiled in lengthy legal battles overseas to stop pirated copies.

With the emergence of the metaverse and blockchain, the digital-ledger technology that makes Bitcoin work, Park is seeking to tap into growing demand for play-to-earn games.

“It was wishful thinking at first to create a virtual world where people are allowed to make money while playing a game,” Park said. “That’s now possible with the development of blockchain technology, and the recent surge in share prices is reflective of our vision.”

Park’s next step was a foray into the world of cryptocurrencies. In 2018, he established blockchain unit Wemade Tree Co., and the company listed its own coin Wemix in 2020. Wemade also invested 80 billion won in Vidente Co., the single-biggest shareholder of crypto exchange Bithumb.

In Mir’s Asian fantasy-based virtual world, players can trade 100,000 units of Darksteel into one Draco token, which then can be converted into Wemix. The value of Wemix rose to as high as 3,587 won on Sept. 19, up 426% from the settlement on Oct. 28 when the coin was listed, according to Bithumb.

“The business started off as a gaming company, but now our dream is to expand the Wemix ecosystem and the virtual world that’s built upon the network,” Park said. “The transition is already taking place with the launch of Mir4.”

After Mir4 was released in Korea in November, Wemade’s revenue jumped 147% to a record high in the first quarter of 2021 from a year earlier, according to an earnings statement. The company, which is based in Pangyo near Seoul, rolled out Mir4 to 170 countries in August.

Wemade has increased its servers almost 15-fold to 163 in less than two months to keep up with demand, while preparing to launch Mir4 in China.

Read more: Why China Is Cracking Down on Its Technology Giants: QuickTake

“Momentum is building on the next lineup of games,” said Hwang Seungtaek, an analyst at Hana Financial Investment Co. “China’s crackdown on the tech industry can be a long-term risk as the country is a crucial market.”

“I am very interested in knowing how China’s crackdown will unfold and how different countries will implement regulations on the blockchain sector,” Park said. “There’s so much to worry about and be prepared for because I learned over the years that even a small risk can take down a company.”