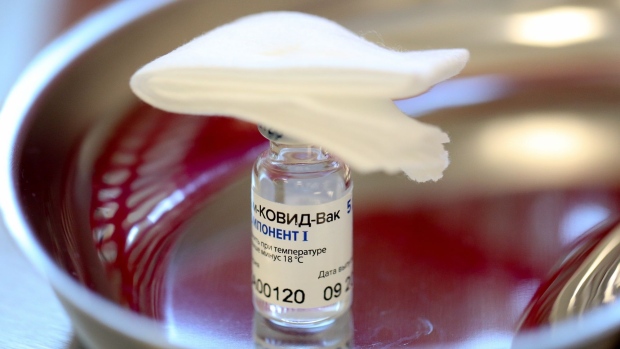 A health worker handles a vial of the 'Gam-COVID-Vac', also known as 'Sputnik V', COVID-19 vaccine, developed by the Gamaleya National Research Center for Epidemiology and Microbiology and the Russian Direct Investment Fund (RDIF) during a trial at the City Clinic #2 in Moscow, Russia, on Thursday, Nov. 26, 2020. , Photographer: Andrey Rudakov/Bloomberg

(Bloomberg) -- Czechs may consider buying vaccines from Russia before they get the European Union’s approval, but won’t use them unless the bloc’s drug regulator gives its green light.

Premier Andrej Babis, whose support has taken a hit from what critics call an inconsistent strategy in handling one of Europe’s worst coronavirus outbreaks, is looking at experience of countries that have approved vaccines made in Russia and China amid delays in EU-mandated deliveries.

Last month, Hungary became the first EU member to agree to buy millions of doses of Russia’s Sputnik V and vaccines developed by China’s Sinopharm, neither of which has been approved by the European Medicines Agency. Serbia, which aspires to join the bloc, is continental Europe’s frontrunner in inoculating its population after securing Sinopharm shots.

“We’re not thinking like that,” the CTK newswire cited Babis as saying before leaving for Serbia on Wednesday. “If we manage to secure some quantity, or some pledges, and our state institute for drug control would approve the documentation as we’re waiting for EMA’s approval, then we could gain some time and get a head-start.”

Like others in the EU, the Czechs had to slow down the vaccination process due to lagging deliveries of shots made by BioNTech SE and Pfizer Inc. and Moderna Inc. Out of 10.7 million people, only 382,416 have received at least one shot as of Tuesday.

Babis is under pressure for what critics say is a failure to stem the pandemic, in which 17,642 Czechs have died so far. The government, which has closed restaurants as well as most shops, services and schools, blames the high infection numbers on lax adherence to the social distancing rules.