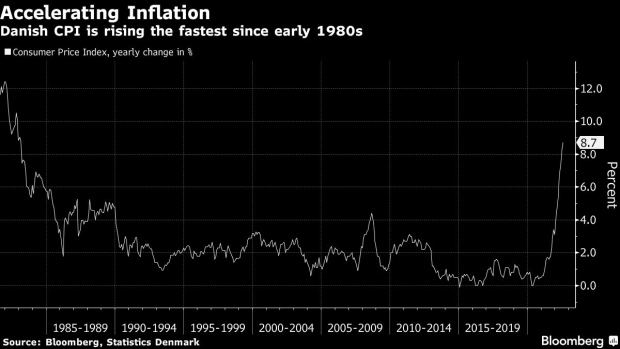 (Bloomberg) -- Denmark’s prime minister, who faces an election in coming months, is considering a cap on rising rents.

Rents, which are tied to the Danish consumer price index, are rising so fast that students and other people can’t afford to pay them, Mette Frederiksen told broadcaster TV2 on Tuesday. A cap would be temporary and could limit rental increases to 4% over two years, she said.

Frederiksen and her Social Democrats have lagged the opposition in recent polls after enjoying strong support during the pandemic, which Denmark emerged from in a better shape than most of its peers. The deadline for the next vote is June 2023, but a party in the ruling bloc has threatened to withdraw its support if Frederiksen doesn’t call for a general election by October.

Denmark’s CPI jumped to 8.7% in July, the highest inflation rate since 1983, the country’s statistics office reported last week. Frederiksen told TV2 on Monday that it may not be fair to use CPI to calculate rent adjustments, because the index includes rising food prices, and the practice thereby punishes people with “double inflation.”