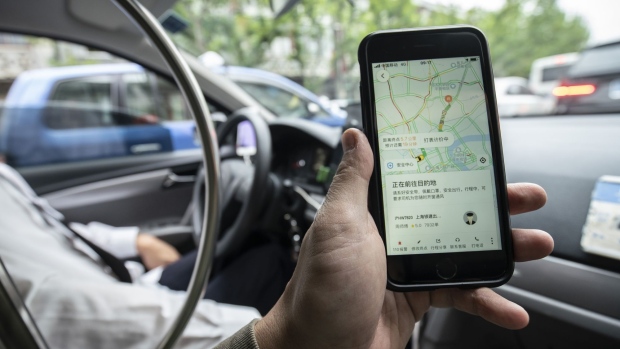 The Didi Chuxing Inc. ride-hailing app is displayed on a smartphone in an arranged photograph in Shanghai, China, on Friday, Sept. 18, 2020. Uber Technologies Inc. is seeking to sell part of its $6.3 billion stake in China's Didi Chuxing, as it begins to shed minority holdings to raise cash, according to people familiar with the matter. Photographer: Qilai Shen/Bloomberg , Bloomberg

(Bloomberg) -- Chinese ride-hailing company Didi Chuxing has filed confidentially with U.S. Securities and Exchange Commission for an initial public offering, according to people with knowledge of the matter.

The company, which has tapped Goldman Sachs Group Inc. and Morgan Stanley as underwriters, is aiming to raise several billion dollars in the listing, the people said, asking not to be identified because the information is private.

The size and timing of the listing could still change.

Didi is also exploring a potential dual listing in Hong Kong at a later time, one of the people added.

Didi, backed by SoftBank Group Corp., had accelerated its IPO plan as business rebounded post-pandemic. It is raising $1.5 billion through a revolving loan facility to shore up capital ahead of the listing, Bloomberg News reported earlier this month.

Reuters had reported that Didi could be filing in April.