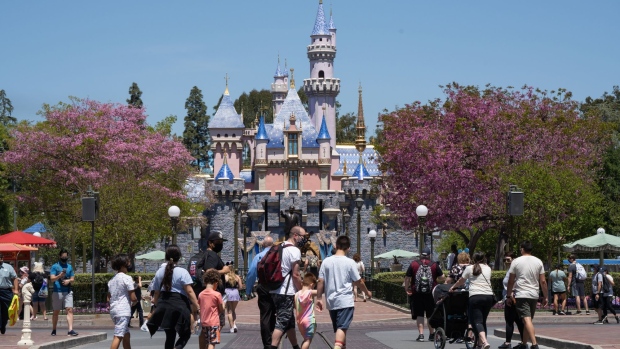 People wearing protective masks walk in front of Sleeping Beauty Castle during the reopening of the Disneyland theme park in Anaheim, California, U.S., on Friday, April 30, 2021. Walt Disney Co.’s original Disneyland resort in California is sold out for weekends through May, an indication of pent-up demand for leisure activities as the pandemic eases in the nation’s most-populous state. Photographer: Bing Guan/Bloomberg , Bloomberg

(Bloomberg) -- Walt Disney Co. raised the price of a single admission to its California theme parks on the busiest days by 6.5% to $164, part of the company’s shift to a system that ties admissions costs to demand.

As part of the move, the slowest days will remain at $104, the same as it has been since 2019, Disney said Monday. The company created a tiered format for ticket prices in 2016, with weekend, summer and holiday prices higher than other days. With this latest step, the company now has six tiers.

The changes suggest companies are feeling comfortable about raising prices as the pandemic ebbs and consumers start to spend again. Disney is confident that higher-end consumers are more willing to spend freely. The company’s second-highest-priced tier is increasing to $159 from $154.

The company’s two theme parks in California, Disneyland and California Adventure, last increased prices in February 2020, before the pandemic prompted an extended shutdown.

Disney said demand has been strong since its California resort reopened in April. The world’s largest theme-park operator has been using price increases, a new reservation system and other tools to help manage demand and maximize revenue.

The changes offer “guests more ticket choices to meet a variety of budgets as it moves closer to dynamic pricing designed to spread visitation throughout the weeks, months and year,” Disney said.

This month, the company began rolling out a new ride reservation system. Priced at $20 in California, it will allow purchasers to access shorter lines. The company said its highest-priced annual pass, which costs $1,399 for year-round access, is sold out.

Disney also has been introducing new attractions, such as the Avengers-themed campus that opened in June at the California Adventure park. The company’s parking-lot trams, closed since the coronavirus, will reopen next year.