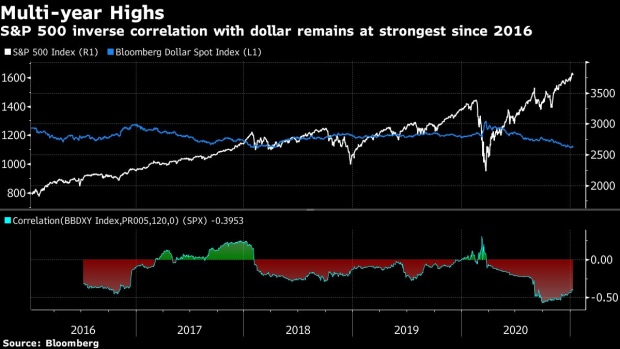 (Bloomberg) -- The dollar has long been a safety trade for global investors. But in post-recessionary phases with the help of fiscal aid, it can double as a bet on a global recovery. With that in mind, as capital flows to the U.S. increase, so might the bid for the currency -- much to the chagrin of traders who entered 2021 with overstretched short dollar positions.

The U.S. has pumped trillions of dollars into the economy, with more to come, all of it aimed at supporting the economy through the pandemic and jumpstarting it as vaccinations take hold. The market is pricing it in, as investors increasingly favor economically sensitive assets like small-cap stocks.

“The consensus on economic forecasts already shows the U.S. as one of only two major economies expected to end this year larger than it started last year,” Elsa Lignos, RBC Capital Markets Global Head of FX Strategy, wrote in a Jan. 12 note.

As American jobs and spending bounce back, international investors are likely to rush to gain exposure to the U.S. recovery, possibly sparking a rotation out of foreign equities and into U.S. stocks. To do that, they’ll need dollars. And those capital flows are likely to boost the greenback.

“We think better economic performance in the U.S. will translate into a cyclical advantage for USD vs non-commodity producing G10 in particular,” Lignos added. “Historically the opposite has rarely been true.”

The consequences of a dollar rebound could be far-reaching. In stocks, the inverse correlation between the greenback and S&P 500 has been at multi-year highs since the start of the pandemic. Dollar weakness incentivizes global investors to buy U.S. equities, which are widely seen as expensive. With a rush to U.S. stocks, and consequently the dollar, that relationship could break down as both rise. Even commodities could become less sensitive to the greenback if there’s an infrastructure bill or broad return to work.

Shorting the dollar has become an extremely crowded trade after the currency pared not only its 2020 gains but also the haven bid it received throughout the trade war with China. The Bloomberg Dollar index is now trading at its lowest level since April 2018, right before the conflict magnified.

Bank of America’s December client survey included shorting the currency as its second most crowded trade -- after going long on tech stocks. The poll in November didn’t feature the dollar at all. And CFTC data shows the most bearish bets against the greenback in nearly a decade. That said, technicals show the greenback may be looking at a reversal after a nine-month slide since the March crash. Despite the downtrend from its 2020 peak, there’s support at the 2018 low.

A U.S. recovery also has implications for real yields. Nominal yields have risen substantially since the Capitol Hill riots last week. Meanwhile, core inflation is expected to remain stable, in contrast to the surge being priced in breakevens. That could give real yields a boost and make the U.S. more attractive than markets with negative yielding currencies. It also gives global investors incentive to buy Treasuries and American bonds rather than their own domestic paper. That could help the dollar emerge as the next big carry trade.

“Japanese investors who have sold foreign bonds over two successive weeks for the first time since May could make their return with the JPY-hedged 10y yield of 64bps, offering a 60bps pick-up relative to domestic 10y JGBs,” a team of strategists at Societe Generale led by Kenneth Broux wrote in a Jan. 12 note.

It’s unlikely, however, to be a straight shot up. Given the influx of stimulus in the near term, the dollar could weaken first. As the economy recovers, investors are likely to abandon the dollar and metals as havens and buy risk, like emerging-markets assets. But that may not last long. The subsequent spike in yields and the potential outperformance of U.S. stocks will draw investors back to American shores. So the dollar smile trade will be shallow, with the bounce in the greenback likely to last well into 2021.