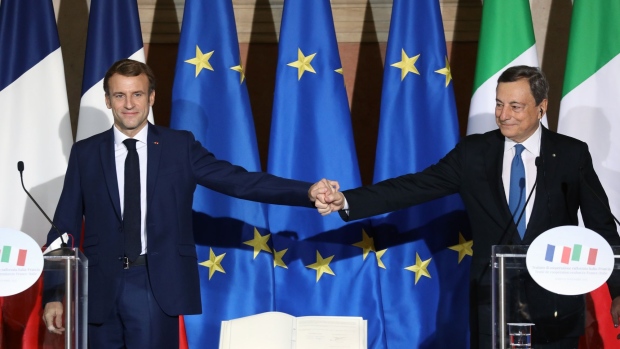 (Bloomberg) -- French President Emmanuel Macron and Italian Prime Minister Mario Draghi signed a bilateral cooperation treaty on Friday in the latest sign of a growing alliance between two of Europe’s most dynamic leaders.

The two shook hands and signed the document at Rome’s Quirinal palace, which will lend its name to the new treaty, as Italian and French jets passed overhead, weaving lines of smoke in the colors of the two nations’ flags.

“In the last few months relations between our countries have intensified,” Draghi said at a press briefing. For his part, Macron was quick to assert that the deal should not be perceived as a snub to other European partners like Germany, saying “these relationships complete and reinforce each other.”

The treaty, which is meant to mirror a 1963 accord between France and Germany known as the Elysee Treaty, marks more intense cooperation in a range of areas including defense and space, fiscal policy, agriculture, digitalization, education, culture, green transition, migration, justice and taxation.

The accord also includes provisions for cooperation and exchanges between ministries and administrative staff and the possibility of reciprocal attendance at cabinet meetings.

A separate accord on space was also signed, Draghi and Macron said.

A draft roadmap for the deal seen by Bloomberg details how the two countries will work together on satellites and try to increase cooperation on European space launchers. That could be good news for companies like Italy’s Avio Aero and France’s Safran SA.

Draghi and Macron have known each other since the Italian premier headed the European Central Bank, but they’ve worked more closely over the past nine months, spending over 10 hours in bilateral meetings together and informally coordinating before key summits.

That has helped ease many of the two countries’ disputes over migrants, Libya, and French takeovers of Italian companies. Disagreements on those issues had strained the relationship under previous Italian governments.

The latest accord also positions Macron and Draghi to wield more influence over European Union policy at a time when German Chancellor Angela Merkel is exiting the scene.

Franco-Italian cooperation on fiscal policy seals an already common approach within the European Union where France and Italy have been pushing for a revision of the bloc’s Stability Pact.

Both leaders have indicated that fostering long-term growth when Europe fully emerges from the pandemic slump is more crucial than immediate debt reduction. France was also among the most vocal promoters of the EU Recovery fund of which Italy is the main beneficiary.

That stance has created tensions with more frugal European partners, including Austria and to a lesser extent Germany, who say they’re worried about debt levels and how the fund money will be spent.