The workings of passive investment indexes in times of crisis is already a subplot of the virus drama following histrionics in the oil market. It’s shaping up as a flashpoint in stocks, too, as overseers wrestle with pushing the eject button on wounded companies.

It’s an urgent issue for the people who run benchmarks like the S&P 500, where dozens of companies are at risk of deletion, at least theoretically, after shares plunged in March. While guided by rules-based standards, index compilers must also grapple with the same judgment as everyone else in assessing the market right now: how much of the COVID impact will turn out to be permanent?

“The S&P committee is going to have to decide how long they want to wait before ditching COVID-damaged companies,” said Nicholas Colas of DataTrek Research, who sees more than 30 companies teetering on the edge of removal. “The S&P 500 may be the world’s most-followed passive index, but COVID-19 and its aftermath is going to force its constructors into some very active choices.”

Anyone needing a reminder of the importance of passive index construction need only look at the remarkable recovery in the S&P 500 since March, a rebound whose strength is largely ascribable to its weighting in technology and health-care stocks. Less appreciated is the impact of four dozen company ejections over the last three years, deletions that centered on retail, industrial and energy companies, which have struggled the most during the virus. 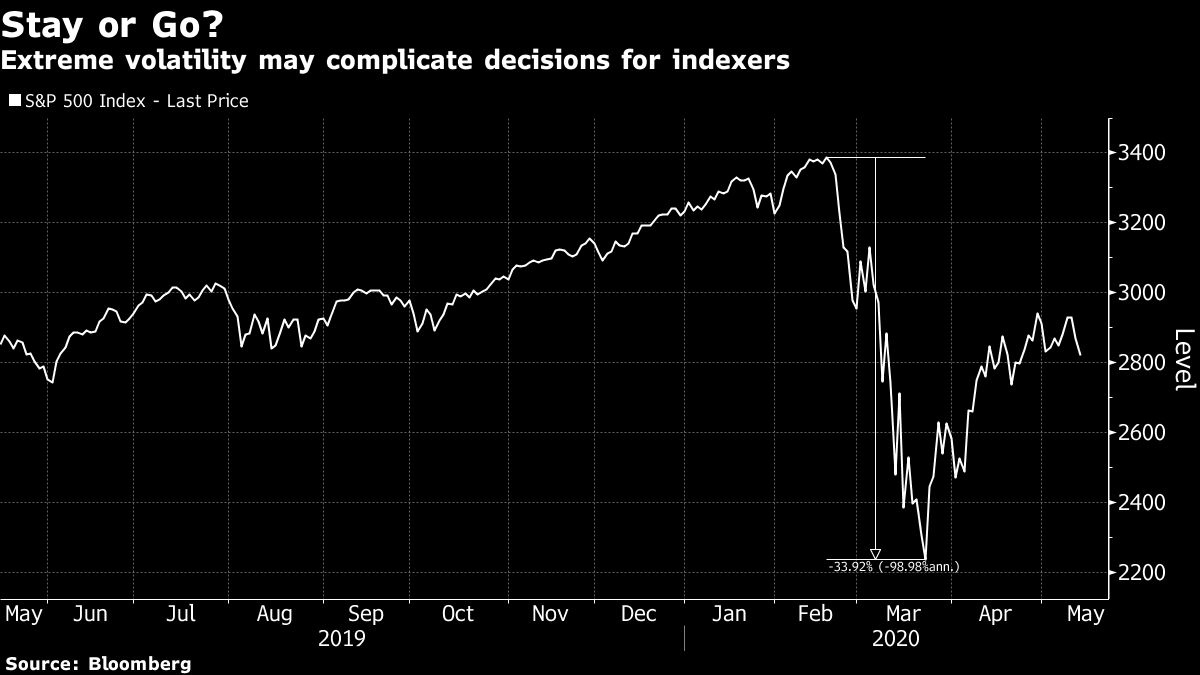 An equal-weight basket made up of companies that were booted from the S&P 500 over the past three years (for reasons other than acquisitions) is down 47 per cent this year, almost five times more than the benchmark’s 2020 decline, according to data compiled by Bloomberg. Just five of the ousted firms have posted positive returns, while half have plunged 40 per cent or more. Oil and gas companies including Chesapeake Energy Corp. and Transocean Ltd. are still off by 80 per cent or more. Bed Bath & Beyond Inc. and Macy’s Inc. are down roughly 70 per cent.

Of course, these companies were already in some form of trouble before the coronavirus struck, hence their removal. But the fact that they belong to industries directly in the cross-hairs of the fallout, where demand is waning, has been lucky for anyone with passive exposure to the market in, say, an S&P 500 ETF. 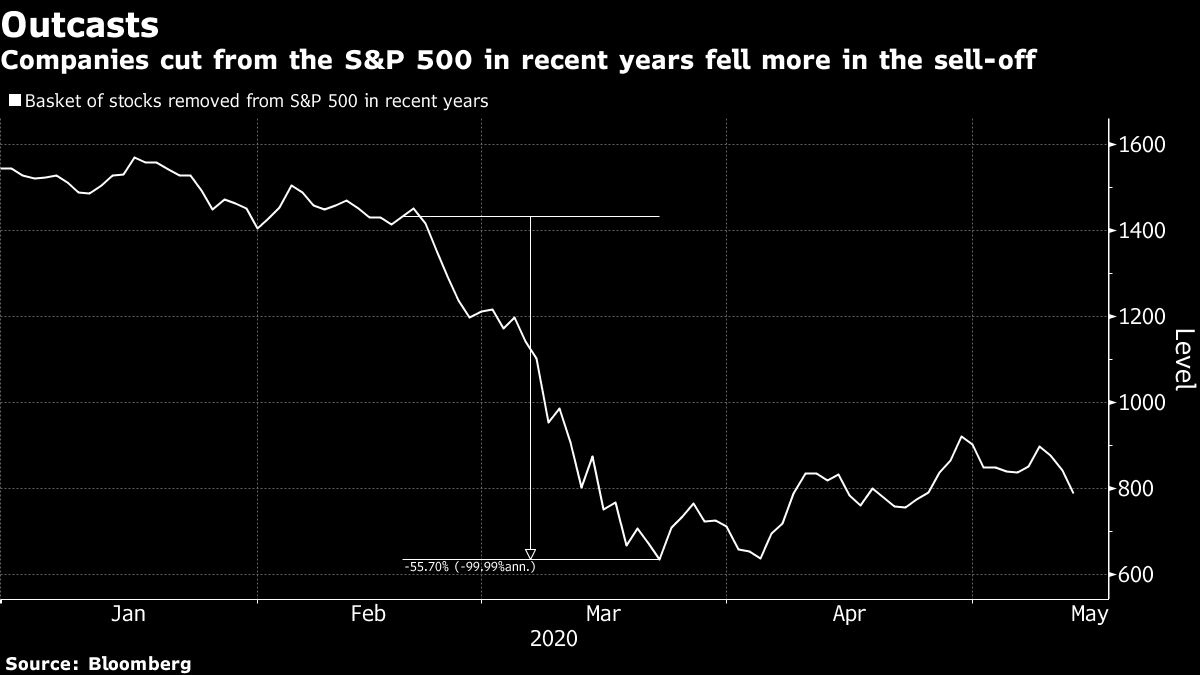 “It was more happenstance than actual foresight that those companies would end up getting worse,” said Keith Gangl, portfolio manager for Gradient Investments. Still, “just by the nature of having less energy and less consumer, that certainly has benefited the index.”

Shifts in index composition are made as needed and “changes in response to corporate actions and market developments can be made at any time,” according to S&P Dow Jones Indices. Human judgment is part of the process, too: the committee aims to minimize turnover and doesn’t view crossing below thresholds governing, say, market capitalization, as a reason unto itself to boot a stock out.

“The addition criteria are for addition to an index, not for continued membership,” says the 41-page S&P U.S. Indices Methodology rule book. “As a result, an index constituent that appears to violate criteria for addition to that index is not deleted unless ongoing conditions warrant an index change.”

Removal of 30 companies would surpass the annual average over the last three decades and rank with some of the busiest years. It’s a reminder that even passive structures have active elements, a fact on display last month when an oil exchange-traded fund reshuffled the mix of its futures time and again. In equity indexes, companies are booted when they fall below standards tied to market-cap or profitability. But deciding which firms to add requires a bit more finesse.

As it stands, a company must have a market-cap of at least US$8.2 billion for S&P 500 consideration. Liquidity measures must also be sufficient, and the sum of total earnings over the past four quarters must be positive, along with profits in the most recent quarter.

Most recently, Capri Holdings Ltd. — the company behind retail brands including Versace and Jimmy Choo -- was removed from the S&P 500 on May 12 after it lost roughly US$5 billion in market value this year. As Capri was transferred to the S&P Small Cap 600 Index, medical device company DexCom Inc. and Domino’s Pizza Inc. were added to the large cap gauge. Both companies have posted double digit gains in 2020.

While market-cap standards “are reviewed from time to time to assure consistency with market conditions,” according to S&P methodology, consider what’s passed for small in the S&P 500 over the last 15 months. Market-cap guidelines for the large-cap gauge were raised to US$8.2 billion on Feb. 20, 2019. After the latest stock rout, about a fifth of companies in the index no longer meet that standard.

The types of companies that can post consecutive profits in a post-Covid world are likely different from those that might have done it before, according to DataTrek’s Colas. Travel or leisure firms “don’t have much of a chance,” he wrote to clients, highlighting Uber Technologies Inc. and Lyft Inc. as examples of companies that may remain unprofitable for longer.

Plus, the index committee is probably hesitant to add more technology firms to a benchmark that’s already concentrated, he said. The S&P 500 Information Technology sector makes up 26% of the index, the highest share since the dot-com burst. 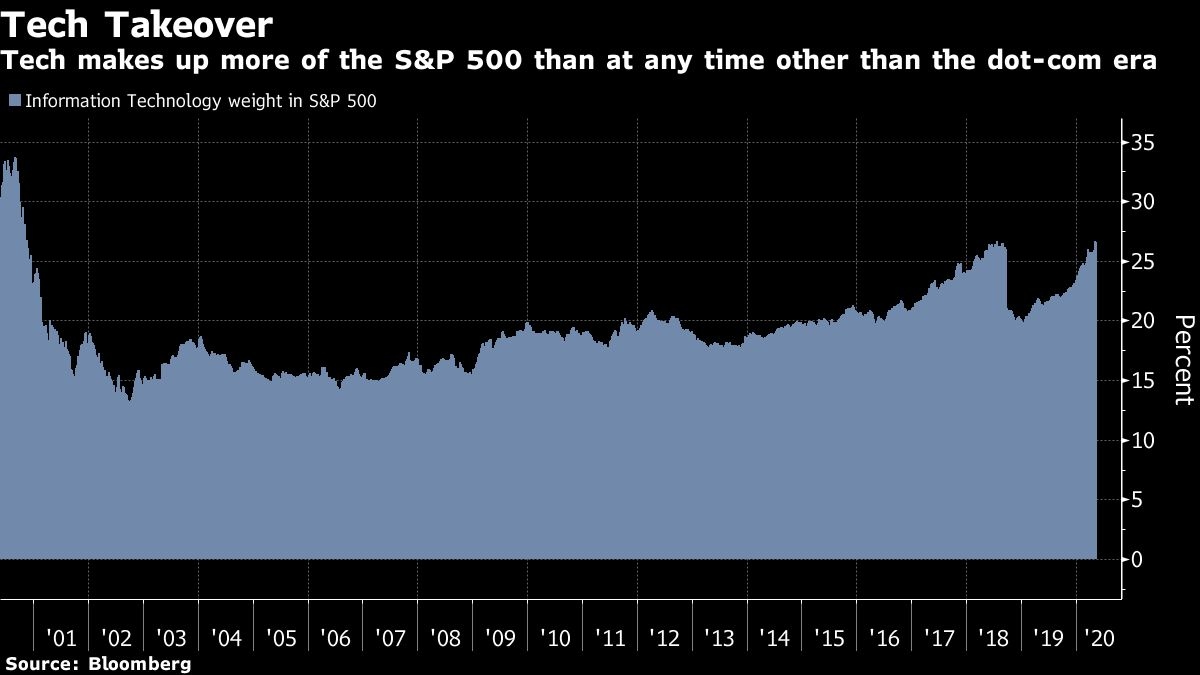 Much of the stock rebound that reached 30 per cent from the March 23 bottom can be attributed to such consolidation. Resilience in megacaps, technology and health care was the salvation of bulls, but a growing schism ruled by automation between stock market “haves” and “have-nots” has provoked some concern worker rights and wealth inequality.

The strong equity performance also left many questioning how the stock market could become so unhinged from the real economy, where measures of unemployment are the worst in nine decades. At least part of the answer lies in the strength of megacap firms, with every member of the Faang complex positive in 2020.

Going forward, it’s likely that market concentration will only increase off the back of the Covid crisis, according to Megan Greene, senior fellow at the Harvard Kennedy School.

“That will create more distortion in a lot of these indices,” Greene said by phone. “As we see a lot more market concentration, it’ll be harder to read what’s going on in the market.”