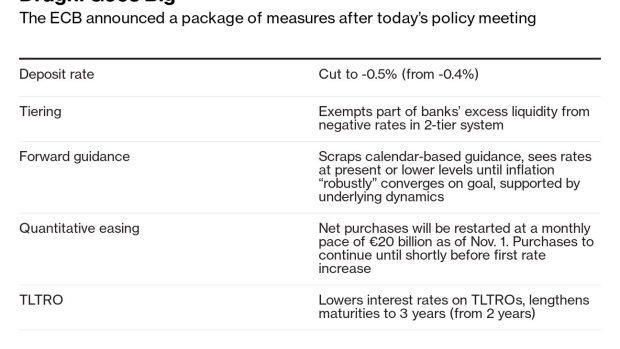 (Bloomberg) -- Austria’s new central bank governor said that the European Central Bank’s latest easing package was possibly a mistake and can be changed after incoming President Christine Lagarde takes over from Mario Draghi.

“As things change -- also this forward guidance and the policy may change -- not tomorrow, not the day after tomorrow, but I wouldn’t think it’s there for the next decades,” Robert Holzmann said in an interview with Bloomberg on Friday in Helsinki. Lagarde is not “a weak person who’ll say I’m locked in one or the other way.”

Holzmann participated in his first Governing Council meeting this week after taking over from his outspoken predecessor Ewald Nowotny. He described Thursday’s debate in Frankfurt as “very intense but also very constructive.”

Despite unprecedented opposition from within the council, Draghi pushed through the restarting of quantitative easing, a rate cut, more generous conditions for long-term loans to banks and left open the possibility for doing more.

Asked if this monetary push was a mistake, Holzmann said “this idea crossed the mind of some people” in the council. “It definitely crossed my mind,” he added.

--With assistance from Allegra Catelli.

To contact the reporters on this story: Alessandro Speciale in Rome at aspeciale@bloomberg.net;Boris Groendahl in Vienna at bgroendahl@bloomberg.net;Maria Tadeo in Madrid at mtadeo@bloomberg.net

To contact the editors responsible for this story: Chad Thomas at cthomas16@bloomberg.net, Jana Randow, Fergal O'Brien