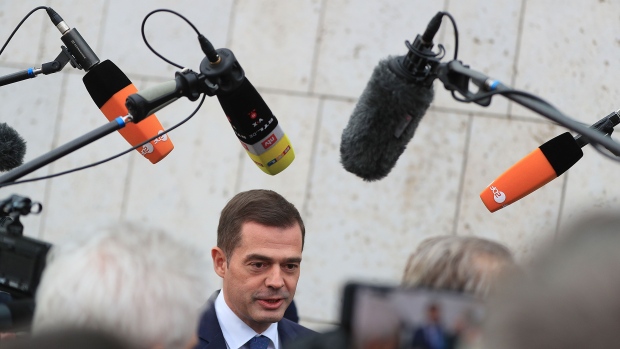 Mike Mohring, state premier of Thuringia and Christian Democratic Union (CDU) lawmaker, speaks with journalists as he arrives at the CDU headquarters in Berlin, Germany, on Friday, Feb. 7, 2020. The leader of Chancellor Angela Merkel’s Christian Democrats came under growing fire from rivals as she struggled with a deepening divide in her party over how to deal with regional lawmakers’ rogue alignment with the far-right. Photographer: Krisztian Bocsi/Bloomberg , Bloomberg

(Bloomberg) -- A senior Christian Democrat lawmaker who played a key role in this month’s shock vote in the eastern German state of Thuringia is stepping down from his post.

Mike Mohring will soon give up his position as the leader of Chancellor Angela Merkel’s CDU in Thuringia, he said Friday on Twitter. His local chapter triggered the demise of Merkel’s embattled heir, Annegret Kramp-Karrenbauer, by voting in line with the far-right Alternative for Germany, defying her orders.

“Our party needs peace and we have to find a common way,” Mohring said in a series of posts on the social network. “I want to make my contribution to this and will not run again at the party congress.”

To contact the reporter on this story: Stefan Nicola in Berlin at snicola2@bloomberg.net

To contact the editors responsible for this story: Daniel Schaefer at dschaefer36@bloomberg.net, Andrew Blackman