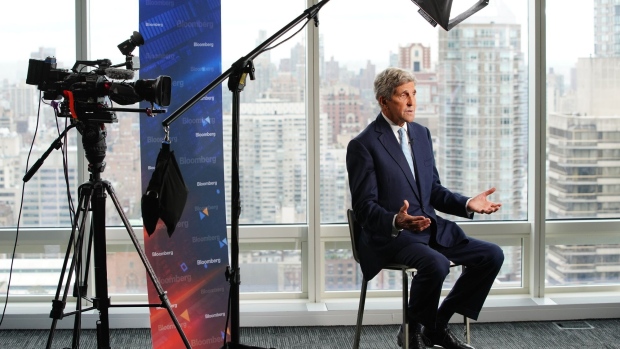 A bucket-wheel reclaimer stands next to a pile of coal at the Port of Newcastle in Newcastle, New South Wales, Australia, on Monday, Oct. 12, 2020. Prime Minister Scott Morrison warned last month that if power generators don't commit to building 1,000 megawatts of gas-fired generation capacity by April to replace a coal plant set to close in 2023, the pro fossil-fuel government would do so itself. , Photographer: Bloomberg/Bloomberg

Government officials speaking on condition of anonymity said they were concerned that the squeeze in energy markets, surging prices, and the resurgence of coal will cast a shadow over efforts to curb emissions when 197 countries meet at the climate change summit, known as COP26, in Glasgow, Scotland.

The risk is that the price spike makes emerging economies -- for example India -- more reluctant to ditch coal because that would threaten energy security, three government officials said. Whereas countries like the U.K. have tried to use gas as a so-called “bridging fuel” as they shift to lower-carbon options, the surge in prices makes that option less palatable -- at least for now. The crisis has also thrown into sharp relief the volatility that can accompany renewable energies.

COP26 President Alok Sharma has set a target for the summit to “consign coal to history” in order to limit global warming to 1.5 degrees Celsius compared to pre-industrial levels. He and U.S. Special Presidential Envoy for climate John Kerry have been urging countries including China, India and South Africa to end their reliance on the dirtiest fossil fuel. Even Europe is now burning more coal -- making it harder for politicians in the region to preach to others.

While the conversation about the need for more gas is unlikely to enter the negotiating rooms where officials discuss the minutiae of legal texts, it may seep into bilateral meetings between ministers, the leaders’ summit at the start, or press conferences. One official said that would be unhelpful to furthering the argument to get off fossil fuels.

The energy supply crisis is showing how difficult ending the dependence on fossil fuels would be. China is driving demand for coal as it tries to secure the fuel to keep the lights on and factories running. Europe, which remains reliant on gas supplies from Russia, is seeing its companies seeking more coal for electricity generation ahead of winter with gas prices at record highs and supply hard to come by.

One official said that diplomats are likely to arrive in Glasgow with gas at the forefront of their minds, which could undermine the climate argument for emerging nations to shift away from coal. In the past, the issue may have been more easily sidestepped. Officials fear top gas-producing countries, such as Russia and Qatar, could also be emboldened to push their own national interests at COP26, threatening the switch away from fossil fuels.

“The key question is whether the spike in global gas prices makes China wobble on shifting away from coal,” said Guy Newey, who was a political adviser to the U.K. government during the Paris climate summit in 2015. “You need to challenge the narrative that a low-carbon future is a high energy cost future.”

Some argue that the energy crunch underscores the imperative for countries to switch to renewable energy or nuclear power, because it will both cut emissions and boost security of supply. But clean electricity can be intermittent. Battery storage still hasn’t taken off to ensure reliable supply, and hydrogen is too expensive for commercial use.

“We need to now recognize that decarbonization will only work when you’ve much more fully decarbonized,” said Bim Afolami, a member of Parliament in the U.K.  “This shows being in a transition phase -- a half in half out approach -- leaves you vulnerable in this way.”