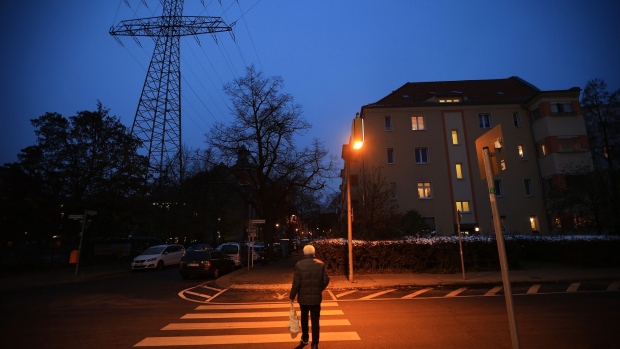 A pedestrian crosses a road near a high voltage electricity transmission tower and partially lit apartment block in a residential district of Berlin, Germany, on Monday, Nov. 21, 2022. The German government plans to collect windfall profits from electricity companies despite legal uncertainties about the proposal, according to a government paper seen by Bloomberg. Photographer: Krisztian Bocsi/Bloomberg , Bloomberg

(Bloomberg) -- Divisions in the European Union over how to contain the economic fallout from surging gas prices are threatening to undercut the bloc’s solidarity, with energy ministers holding an emergency meeting on Thursday to try to overcome the differences.

The aim is to reach an agreement on a package that includes strengthening a mechanism for joint gas purchases, limiting intraday price volatility, and enabling faster permitting for renewable energy projects.

But a recent proposal from the European Commission, the bloc’s executive arm, to try to cap gas prices has drawn widespread criticism -- with some calling it a mockery -- and could put Thursday’s energy package at risk of being blocked.

“The maximum gas price is key and this proposal that appeared two days ago, we treat it as a joke, and it’s hard to treat it seriously,” Polish Climate Minister Anna Moskwa told reporters in Brussels on Thursday. Belgium’s energy minister, Tinne Van der Straeten, went further, saying “we can’t make a decision on anything as long as we can’t decide on everything.”

Failure to reach a deal would send a signal that the EU’s united response to the war-driven energy crisis is falling apart -- a political gift for Moscow that Europe is keen to avoid.

In the background, another fight still festers: the bloc is bitterly divided about how to implement a Group of Seven-led plan to curb Russia’s oil revenues. EU diplomats failed to reach an accord after deliberations ran late into Wednesday night, but are optimistic a deal can be clinched as early as Thursday.

The commission came up with a proposal to cap the price of gas this week after repeated calls from a large group of member states -- even amid concerns from other quarters that the move could endanger supply. The proposed emergency brake level of €275 per megawatt-hour is well above current levels, raising the question if it will ever be used, and has complicated Thursday’s meeting.

“We expect the discussions today to be rather spicy,” Czech deputy prime minister Jozef Sikela told reporters ahead of the meeting.

There’s no quick outcome expected on the gas-cap proposal: the regulation is scheduled for a first discussion at the meeting on Thursday before debate by EU leaders at a summit in December. The danger now is that supporters of a stronger gas cap may try to muster enough votes to take the broader energy package hostage and block it unless their demands are met.

Tensions are running high: the cap proposal was derided by Spain on Wednesday as a “mockery,” as it would only be triggered if a series of conditions are met. Those conditions are so strict that even during the historic peak of European gas prices in August it would not have been activated.

France also complained, calling the conditions extreme, and Polish Prime Minister Mateusz Morawiecki said the terms were “a cause for concern.” Malta’s Energy Minister Miriam Dalli said ahead of Thursday’s meeting that “obviously the proposal on the table is not fit for purpose.”

The package up for approval on Thursday includes:

“I sincerely hope member states will reach on political agreement on joint gas purchases and stronger solidarity -- discussions so far have shown there is broad support for those measures,” EU energy chief Kadri Simson told reporters. “A political agreement would send a strong message of solidarity.”