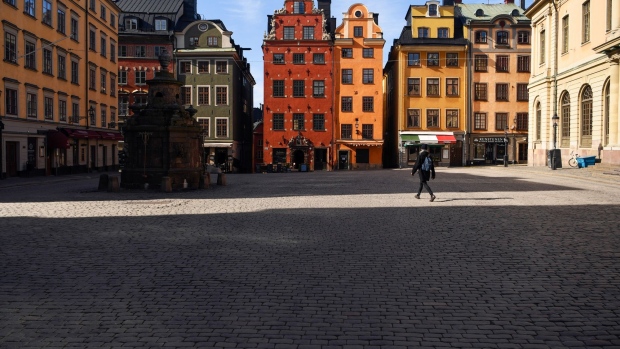 A pedestrian walks through an empty square in the Gamla Stan square in Stockholm on March 26. Photographer: Mikael Sjoberg/Bloomberg , Bloomberg

(Bloomberg) -- Less than 24 hours after Angela Merkel and Emmanuel Macron laid out a radical plan that would see the European Union collectively finance its response to a virus-induced recession, countries were already expressing disapproval, threatening to doom the nascent proposal.

The German and French leaders on Monday threw their weight behind a plan to allow the EU’s executive arm issue 500 billion euros ($548 billion) of bonds, with the proceeds going to help member states affected most by the pandemic. Controversially, recipients of the funds won’t need to pay the EU back and the securities would be financed collectively. That means richer countries, like Germany, would be bankrolling poorer ones.

The plan represents a remarkable about-face for Germany, and the proposal, which needs unanimous approval by all 27 members of the EU, faces stiff headwinds from the bloc’s more frugal members.

“We still have to convince other member states, four in particular: Austria, Denmark, Sweden and the Netherlands,” French Finance Minister Bruno Le Maire said on Tuesday. “And we mustn’t hide the fact that it will be difficult.”

Austrian Chancellor Sebastian Kurz immediately threw cold water on the Franco-German plan, saying that he had consulted with his Danish, Dutch and Swedish counterparts, and that they remained opposed to any money being given to fellow countries in the form of grants. Any funds would have to be repaid by the beneficiaries, he said.

The Danish Finance Minister Nicolai Wammen told the news agency Ritzau that the country’s position hadn’t changed with regards to jointly issued debt, and that it was coordinating its stance with the other frugal EU members.

During a video conference between Merkel and members of the so-called Visegrad Four -- Poland, Slovakia, the Czech Republic and Hungary -- Warsaw indicated that it had serious doubts over the plan and would need to hold more discussions, according to an official familiar with the discussions.

While Polish Prime Minister Mateusz Morawiecki believes that the proposal is a move in the right direction, more negotiations are needed to iron out the issue of how the funds would be divided among the countries, said the official, who asked not to be identified because the talks were private.

“Poland could play hardball,” said Daniel Gros, director of the Brussels-based Centre for European Policy Studies. New member states, which joined the EU in 2004 and 2007, are “the only ones who can still derail an agreement,” while frugal Northern states can “still nibble at the edges, making eligibility more stringent,” Gros said.

“We find the idea strange that we would borrow funds and then pay it out as transfers,” Andersson said in an interview, adding that this was her biggest problem with the proposal. “As I see it, this would be a deficit-financing of the EU budget.”