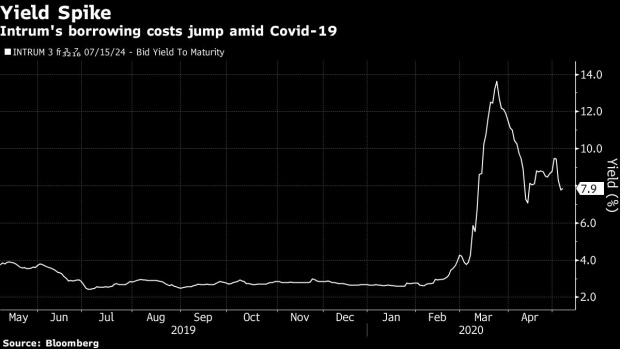 Pedestrians use a road crossing in Stockholm, Sweden, on Thursday, April 23, 2020. Confidence levels in Sweden plunged to record lows in April amid concerns that the coronavirus pandemic may push the Nordic region’s biggest economy into its worst recession since World War II. Photographer: Mikael Sjoberg/Bloomberg , Bloomberg

(Bloomberg) -- One of Europe’s biggest debt collectors, Intrum AB, has raised the hackles of investors by splashing cash on a share buyback at a time when the industry is struggling to adapt to lockdowns across much of the continent.

The company’s repurchase of stock worth 490 million kronor ($50 million) in the first quarter triggered “a fair degree of scepticism” on an earnings call earlier this week, according to analysts at Lucror Analytics.

Investors repeatedly asked management why the company undertook share buybacks in the first quarter “when liquidity preservation should have been its primary priority,” the analysts said.

Firms such as Intrum, which buy overdue credit cards and mortgages at a discount, have been on a borrowing binge in recent years thanks to record low interest rates and a bank sector keen to offload loan portfolios in the wake of the financial crisis.

As a result Intrum’s leverage remains “dangerously high,” according to Handelsbanken analysts. On Wednesday the company reported a net debt to cash Ebitda ratio of 4.5x and pushed back its target of reaching 2.5x to 3.5x to 2022 from 2020.

But now -- amid the fallout from Covid-19 and fears of delayed payments in countries under lockdown -- debt collectors have seen borrowing costs skyrocket, breaking what could be a crucial link in their business model: access to cheap funding.

Intrum has been a prolific issuer of debt on both the euro and Swedish markets in 2019 and its outstanding bonds currently total 43.8 billion kronor, according to the company.

“I am very happy with all the activity we did last year,” Chief Executive Mikael Ericson said in an interview after the first quarter report.

“We are basically independent of the capital market for the next three, possibly even four years, and can handle the maturities that come up with internally generated cash flows,” Ericson said.

While the company’s liquidity position is healthy, first-quarter results were lower than Intrum had hoped for going into 2020, according to Ericson. Adjusted earnings before interest and tax fell 19% year-on-year to about 1.1 billion kronor, and revenue shrank by 11%.

The damage to profitability from its exposure to Spain and Italy has already prompted one rating company to push Intrum’s credit rating deeper into junk territory.

Standard & Poor’s downgraded Intrum to BB from BB+ last month and signaled the rating may be cut further. Fitch Ratings has also revised the outlook on its BB rating to negative, citing earning risks from a potential weakening in debt collection performance.

“With a CDS spread exceeding 1,100bp and negative rating outlooks, we expect funding costs to increase,” the Handelsbanken analysts said.