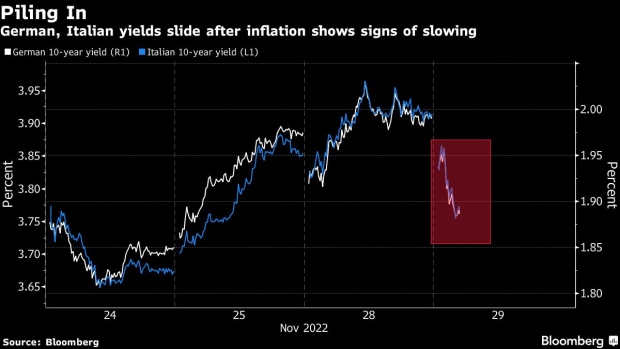 (Bloomberg) -- Investors rushed to scoop up European debt and cut bets on rate hikes after data showed prices in Germany and Spain may be slowing.

That sent German, Spanish and Italian 10-year yields heading for their biggest fall in two weeks. Prices in German states such as North-Rhine Westphalia slowed this month, an early indicator ahead of a national figure due at 1 p.m. London time.

Spanish inflation also eased for a fourth month and by more than expected. Euro area inflation data due on Wednesday is also forecast to slow to 10.4%, but the core inflation figure is expected to hold steady at a record high 5%, highlighting the challenge facing policy makers.

Money markets have still slashed odds on another three-quarter-point interest-rate hike from the European Central Bank next month, putting that at a 30% chance compared to 50% on Monday. Wagers on how high the key deposit rate will rise have also been cut to 2.90% by June, compared to 3% recently.

While ECB President Christine Lagarde said in remarks made on Monday she wouldn’t go so far as to say inflation has peaked, she also affirmed that policy would be data-dependent and decided meeting by meeting.