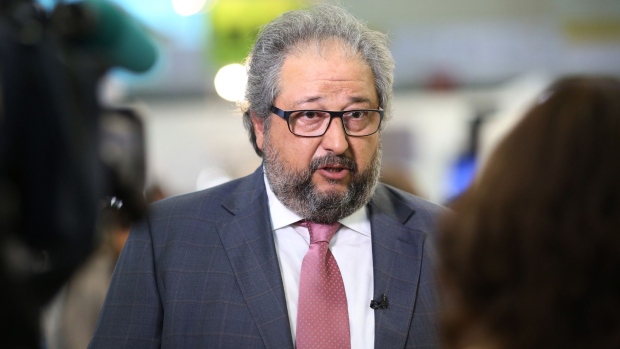 (Bloomberg) -- A Hilton-branded hotel in a Cotswolds town known for horse jumping has become a flash point in long-running fraud allegations brought by Russian state banks against tycoon Boris Mints.

An investment firm named Conquer Dawn has agreed on preliminary terms to buy the 148-bedroom DoubleTree in Cheltenham, England out of insolvency, according to people familiar with the negotiations. Lawyers for the state-controlled Russian banks suggest such a deal would effectively amount to the Mints family buying the hotel from themselves, something that representatives for Mints dismissed.

The property had been part of a 2019 global freeze of Mints’ assets in relation to an $850 million fraud suit in London for his alleged role in the collapse of Bank Otkritie, which he founded, prompting a rescue by the Russian central bank.

Mints has long denied those allegations and his lawyers sought to call a halt to the litigation last month, arguing that sanctions imposed on one of the banks that initiated the suit against him made attempts at pursuit through the UK courts unlawful. A ruling in the suit is expected at the end of the month.

The sanctions opened the door for Metro Bank Plc — one of the Cheltenham hotel’s creditors — to place it into administration, seeking to recover a loan of more than £10 million.

Now administrators are seeking to sell the property and have entered into exclusive talks with Conquer Dawn, the people said, asking not to be identified because the process is confidential. According to marketing materials sent to investors in June that were seen by Bloomberg, real estate broker Avison Young, which the administrators appointed to sell the hotel, is seeking offers in the region of £17 million. The deal is not yet signed and there’s no certainty the transaction will be completed, the people said.

Companies in administration are frequently purchased by groups with close ties to the original owner. A spokesperson for Mints denied that he controlled the possible buyer and said he had no influence over the sale process.

Conquer Dawn’s directors include people who have worked with Mints, according to Companies House filings. Conquer Dawn is “closely related to the Mints family” and the sale decision by the administrators for the hotel is a “means for the Mints family to retain control of the hotel,” lawyers representing Bank Otkritie and National Bank Trust, the Russian parties that filed the fraud suit against Mints, said in a letter that was seen by Bloomberg to lawyers working with administrators. National Bank Trust took over part of the claim after a bailout by the Russian Central Bank.

John Nacos, who owns 33% of Conquer Dawn according to Irish company filings, served until March 2016 on the board of O1 Properties, an entity run by Mints’s family, the landlord’s annual reports show.

Viacheslav Nazarov, a Russian citizen and director of Mints’s UK holding company, Lethendy Estates Limited, is also a director of Conquer Dawn. Named for the Tower of Lethendy, a Scottish castle Mints owns, the company holds a number of assets  — including the Cheltenham hotel — but was banned from disposing of any of them after the worldwide asset freeze issued in connection with the fraud case.

The spokesman for Mints said that while Nacos and Nazarov had worked with Mints, there was no special relationship between them and the tycoon. Nazarov is transitioning to working for Conquer Dawn from Lethendy Estates, the spokesman said. Nazarov and Conquer Dawn declined to comment when contacted by Bloomberg.

While the Kremlin’s invasion of Ukraine triggered sweeping international sanctions that cut numerous Russian businessmen and companies off from their overseas assets, the war could have the opposite effect for Mints.

The Cheltenham hotel, held via a separate entity owned by Lethendy Estates, was placed into administration by Metro Bank in May last year. Metro Bank had given the company a loan with the hotel as collateral in 2018, the year before Mints’ assets were frozen. When Bank Otkritie, now run by the Russian central bank, was sanctioned last year, the lender saw an opportunity to retrieve the money it was owed.

By placing the firm into administration, assets once frozen could be sold off to satisfy Metro Bank’s loan.

Tasked by Metro Bank with handling the hotel’s insolvency, administrators at Quantuma negotiated the removal of court-imposed restrictions that may have hampered the hotel’s sale, according to a report issued last month to Companies House. While the Russian banks agreed to accept the lifting of any restrictions on the sale, they warned in a letter that they would reapply for similar limits if the sale to Conquer Dawn proceeded.

Conquer Dawn is a relatively new entrant to the market for UK hotels, announcing it would buy a pair of properties from Shiva Hotels in September 2021. Nacos also serves as chief investment officer of Aggregate Holdings SA, the landlord run by controversial tycoon Cevdet Caner and backed by Gunther Walcher.

--With assistance from Laura Benitez.