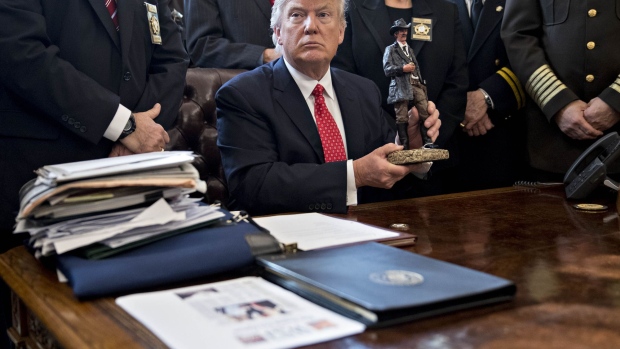 U.S. President Donald Trump holds up a statue he received as a gift while meeting with county sheriffs in the Oval Office of the White House in Washington, D.C., U.S., on Tuesday, Feb. 7, 2017. The Trump administration will return to court Tuesday to argue it has broad authority over national security and to demand reinstatement of a travel ban on seven Muslim-majority countries that stranded refugees, triggered protests and handed the young government its first crucial test. , Bloomberg

(Bloomberg) -- Donald Trump had his own way of keeping records during his presidency: heaping documents in boxes, tearing up papers to signal a discussion was over, even flushing some notes down the White House toilet.

That unorthodox approach is drawing attention as authorities investigate whether Trump took classified materials from the White House upon leaving office, a probe that escalated with an extraordinary FBI search of his Florida estate on Monday.

All of a president’s official papers, no matter how trivial, are considered public property, not his alone, according to the Presidential Records Act of 1978. When the president leaves office, those papers go to the National Archives and later as part of a presidential library.

“I never heard a single story from anyone about Clinton or Bush or Obama just randomly taking classified documents and walking around the residence with them,” said David Priess, who used to deliver the classified Presidential Daily Briefing and has written a history of the practice. “It probably happened. Presidents do paperwork in the residence, and sometimes take papers with them. But I’ve been following this for 20 years and until Trump I had not heard members of the president’s own staff express concern.”

Monday’s hourslong FBI search of Mar-a-Lago, which Trump said included his safe, was related to a request from the National Archives and Records Administration to the Justice Department to look into the transfer of presidential documents to Mar-a-Lago, including classified materials.

The Archives in January retrieved 15 boxes of records from Mar-a-Lago. Trump turned those documents over only after facing possible legal action over their removal. Some of Trump’s closest aides were unaware of the location of any safes at Mar-a-Lago, according to several people familiar with the matter.

It is unclear if the search involved any of the other potentially criminal investigations he faces. The FBI and the Justice Department declined to comment on the search.

Throughout his presidency, Trump kept various papers -- including news clippings, mementos, and, on occasion, classified documents -- stored in separate piles. Some of those were among items boxed up and taken to Mar-a-Lago when he left office.

Trump would regularly signal he was done discussing a topic by ripping up related papers, including documents and newspapers, and throwing them on the floor.

“We were always worried about documents,” former Trump chief of staff Mick Mulvaney said in an interview with Bloomberg Radio’s “Sound On.”

“If we had a document and we made a change to it, he might rip it in half and throw the one we weren’t using on the floor,” Mulvaney said. “And we would have someone come in and tape it back together and make a copy of it.”

He also sometimes used toilets to dispose of handwritten notes, people familiar with his practices said, including those he wrote himself and those written by others. Aides at the time said they believed the notes were on trivial matters, including messages the president thought would be embarrassing if they became public, according to people familiar with the matter.

The people familiar with the matter said they had no reason to believe at the time that Trump had flushed any classified documents, but they remember general concerns that the president was violating the Presidential Records Act by flushing papers that should have been preserved.

Staff tried to preserve at least some of the paperwork retrieved from toilet bowls, people familiar with the process said. The torn pieces were bagged up, dried, reassembled and photographed.

The Presidential Records Act covers all documents related to the job and exempts personal records like diaries, partisan activities or election campaign materials.

When the president leaves office, the records are transferred to the custody of the US archivist. From there, every president since Herbert Hoover has used those to create a library enshrining his legacy, but Trump has shown little interest in such an effort while he mulls another run for the White House.

Trump was never briefed after the election on what to take and what not to, according to people familiar with the matter. The transition from Trump to President Joe Biden was highly unusual because of Trump’s refusal to concede his defeat, an act that triggers cooperation between the outgoing and incoming presidents.

The Presidential Records Act grew out of a 1974 law that applied specifically to former President Richard Nixon to prevent him from destroying 42 million pages of documents and 880 tape recordings from his presidency, including many related to the Watergate scandal.

Theft or destruction of federal records is a felony punishable by up to three years in prison -- and disqualification from federal office. But it’s unlikely that the law applies to the office of president, because those qualifications are set out in the Constitution.

Prosecutions are rare but not unheard of. In 2005, Sandy Berger, a National Security Advisor to former President Bill Clinton, was convicted and disbarred for removing classified records -- including some he stuffed down his pants -- from the National Archives concerning the Clinton administration’s intelligence on terrorism that preceded the 9/11 attacks.