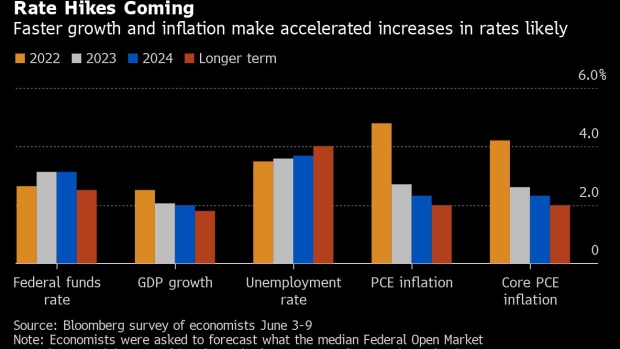 Federal Reserve policy makers are likely to signal a continuing shift to a more hawkish policy fighting inflation with interest rates climbing above 3% in 2023, according to a Bloomberg News survey of economists.

The Federal Open Market Committee will raise rates by 50 basis points next week and by the same amount in July, but then slow the pace of tightening to 25 basis point increments from September, the survey found. Officials were expected to project rates at 2.6% by year’s end and 3.1% in 2023. That compares with 1.9% and 2.8% in their March forecasts. The current target range of the benchmark policy rate is 0.75% to 1%.

Chair Jerome Powell has signaled half-point hikes are on the table for this month and next to curb the hottest price pressures in nearly 40 years. But he’s been careful to avoid saying how high they’ll peak, which makes the Fed’s quarterly dot-plot forecast for interest rates a primary focus of investors when officials meet June 14-15. The committee will release a statement and updated economic estimates at 2 p.m. Wednesday and Powell will hold a press conference 30 minutes later.

The rate path the FOMC is projected to lay out by economists is less aggressive than what markets are expecting. Not only are investors pricing in the half-point hikes Powell has repeatedly suggested are likely, they are expecting a similar-sized increase in September and further hikes in November and December.

“We see the Fed raising the Fed funds rate by 50 basis points at each of the June and July meetings before scaling back the pace of tightening to 25 basis points rate increases at the remaining meetings of the year,” Oxford Economics chief US economist Kathy Bostjancic said in a survey response.

Powell is trying to steer the economy toward a soft landing of slower growth, a still robust labor market and low inflation. The economists’ own projections largely match what they see as the “dot plot” with the top of the target range for the policy rate hitting 2.75% in December, 3% at the end of 2023, and a peak rate during the tightening campaign of 3.25%.

The survey of 44 economists was conducted June 3-9.

Inflation remains the central issue driving policy adjustments for the Fed. The committee is likely to raise its forecasts for prices based on the persistence of the problem, and may project increases of 4.9% for 2022, 2.8% for 2023 and 2.3% for 2024. That would mean missing the long-run target of 2% during the entire three-year forecast horizon.

“We expect the dot plot of the rate path to become more hawkish. We expect to see the median dot for 2023 to be in the low 3s, staying there through 2024. It would be lower than the current eurodollar implied terminal rate of 3.5%.”

At the same time, the committee’s forecasts might hint at a willingness to slow the labor market as they project slight increases in the unemployment rate in 2023 and 2024 from its projection of 3.5% this year. The jobless rate was 3.6% in May and Powell has described the job market as tight to an unhealthy degree.

“With expectations of more aggressive hiking, and signs in incoming data that housing is on a weaker trajectory, we see slower GDP growth through 2023 and a higher unemployment path next year,” Barclays Plc economist Jonathan Millar said in a survey response.

The Fed chief has emphasized that the central bank will be nimble in its rate-hiking plans and the FOMC in its prior statement offered only loose guidance that ongoing increases would be appropriate. Nine-tenths of the economists expect the committee to repeat the guidance, while the rest say there may be a more aggressive rate signal.

The vast majority of economists also expect a unanimous decision this month, which will include the addition of two new governors, Lisa Cook and Philip Jefferson.

There’s less certainty around plans to shrink the Fed’s balance sheet, which started this month with the runoff of maturing securities. The Fed is phasing in its reductions to an eventual pace of $1.1 trillion a year. Economists project that will bring the balance sheet to $8.4 trillion by year end, dropping to $6.7 trillion in December 2024.

Two thirds of those surveyed say officials will resort to outright sales of mortgage-backed securities, in line with their stated preference to only hold Treasuries in the longer run. Among those expecting sales, there’s a wide range of views on when selling would begin, with a slight majority seeing it start next year.

Wall Street economists have recently been raising more concerns about the potential for recession as the Fed tightens monetary policy amid headwinds including rising energy prices amid Russia’s invasion of Ukraine.

The economists are mixed about the outlook, with 31% seeing a recession as likely in the next two years, 21% seeing some time with zero or negative growth likely and the rest looking for the Fed to achieve a soft landing of continuing growth and low inflation.

“A soft landing will be difficult to achieve with a blunt instrument like the policy rate that also works with a considerable time lag,” said Philip Marey, senior U.S. strategist at Rabobank, in a survey response.

Most economists expect the Fed to halt its tightening altogether with inflation still a bit above the 2% target. Nearly three quarters say they see rate hikes stopping with core inflation, which excludes volatile food and energy, of 2.6% or more.