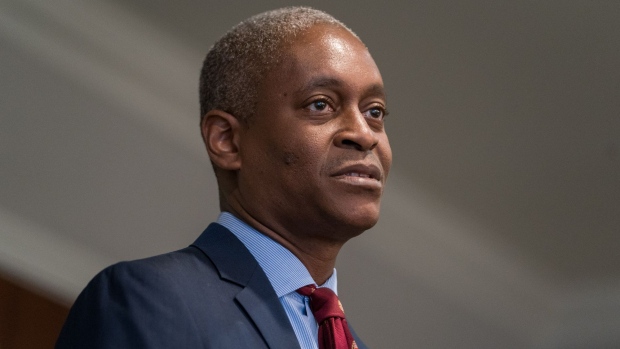 Raphael Bostic, president and chief executive officer of the Federal Reserve Bank of Atlanta, speaks to members of the Harvard Business School Club of Atlanta at the Buckhead Club in Atlanta, Georgia, U.S., on Wednesday, Feb. 19, 2020. Bostic said he's not seeing risk levels rising to a point that they would be a "source of concern." , Bloomberg

(Bloomberg) -- Federal Reserve Bank of Atlanta President Raphael Bostic played down the risk of a new Covid-19 variant to the U.S. economy and said he was open to scaling back asset purchases at a faster pace to keep inflation in check.

“I am very open to accelerating the pace of our slowdown in purchases,” Bostic, a voter this year on the policy-setting Federal Open Market Committee, told Fox News in an interview Friday. “For me, early second quarter, late first quarter of 2022 are all in play as reasonable alternatives for when we might stop our purchases if the economy’s momentum continues as it has over the last several months.”

Asked if he could see the Fed raising interest rates twice next year, he said that “it’s certainly possible. I don’t take any kind of actions off the table.”

Treasury yields fell sharply earlier on Friday amid concerns about the latest coronavirus variant identified by researchers in South Africa, as investors dialed back bets on the pace of monetary policy tightening.

Bostic said that the new variant would probably slow the economy somewhat, but the lessons learned during the pandemic indicated that the headwind would be less than in the past.

“We have a lot of momentum in the economy right now,” he said. “That momentum, I’m hopeful, will be able to carry us through this next wave.” But he also cautioned that “all of that is predicated on the idea and the notion that the new variant is similar to delta.”

Friday’s moves in markets go against the recent trend in markets to anticipate the Fed could speed up its removal of support for the economy, after hotter readings on inflation prompted some officials to discuss accelerating the pace of tapering their asset purchases.

The rally in Treasuries pushed the yield on the benchmark 10-year note down 16 basis points to close around 1.47%, its largest single-session decline since March 2020. Traders pushed back the timing of a first 25 basis-point rate increase by the Fed to September from June.