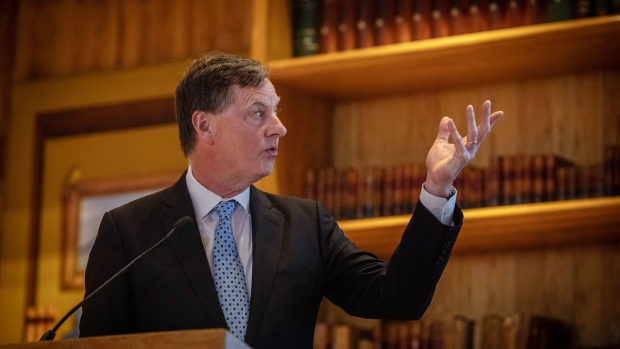 Charles Evans, president of the Federal Reserve Bank of Chicago, speaks during the Global Interdependence Center (GIC) Central Banking Conference in Mexico City, Mexico, on Thursday, Feb. 27, 2020. Mexico's central bank slashed its growth forecast for this year and said it will take longer than expected for inflation to slow to target, suggesting policy makers have limited room to lower borrowing costs to stimulate the economy. , Bloomberg

(Bloomberg) -- U.S. inflation is unlikely to get out of control despite the unprecedented government spending that’s been authorized in response to the coronavirus pandemic, Federal Reserve Bank of Chicago President Charles Evans said.

“I think the risk of this scenario is remote,” Evans said Wednesday in remarks prepared for a virtual speech.

The Chicago Fed chief, who has long been one of the central bank’s biggest worriers about inflation being too low, was responding to critics of the Biden administration’s fiscal programs, which include not only Republicans but also some economists associated with the Democratic party.

Most of Evans’s colleagues at the Fed, including Chair Jerome Powell, have pushed back forcefully against such criticisms in recent months. Instead, they’ve highlighted the importance of the fiscal support in speeding the labor market back to full employment.

“With these developments, my outlook for growth and unemployment is much more positive today than it was just a few months ago,” Evans said, referring to the measures.

Fed officials, following last week’s meeting of the central bank’s policy-setting Federal Open Market Committee, held interest rates near zero and reaffirmed guidance that they would continue buying bonds at a pace of $120 billion per month until the economy had made “substantial further progress” toward their employment and inflation goals. Powell said in a press conference afterward that would take “some time.”