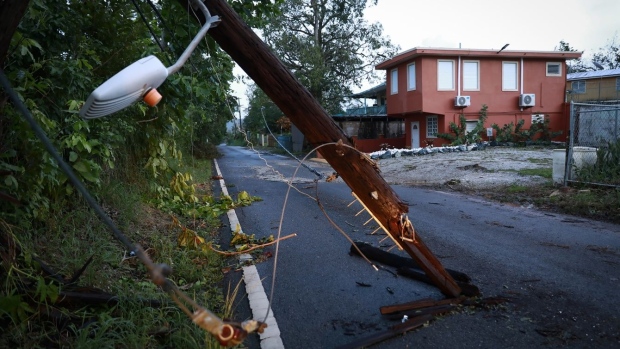 (Bloomberg) -- Fiona, the most powerful storm of this year’s Atlantic hurricane season, roared ashore in eastern Nova Scotia early Saturday as one of the strongest systems ever to hit the region, knocking out power, toppling trees and forcing residents to flee.

Across Nova Scotia, 414,000 households were without power, or about 80% of Nova Scotia Power’s customers. Thousands more were hit in neighboring areas as well.

“We are asking Nova Scotians to stay close to home if it is safe,” Tim Houston, Nova Scotia’s premier, said in a tweet. “Please check in on your family, friends and neighbours.”

Nearby Price Edward Island was also hit by outages, and officials had urged residents to stay indoors until Sunday. “Conditions are like nothing we’ve ever seen,” police in Charlottetown, the provincial capital, tweeted, showing photos of downed trees and damaged homes.

Prime Minister Justin Trudeau, set to fly to Japan for Shinzo Abe’s funeral, is delaying his trip, Canadian Broadcasting Corp. said citing his office. The news agency also said Port aux Basques in Newfoundland and Labrador was under an emergency evacuation order and people had to flee from flooding.

The storm, which ravaged the Dominican Republic and Puerto Rico earlier this week, made landfall on the Canso Peninsula near Hart Island with winds of 90 miles per hour, according to the US National Hurricane Center. It’s expected to unleash flooding rains across Nova Scotia, Prince Edward Island, Newfoundland and Labrador.

Fiona is a potent sign the Atlantic hurricane season is coming to life after months of quiet. The Atlantic didn’t spur a single tropical storm during August. Now September has given rise to three hurricanes, with a fourth threating to form and strike Cuba and Florida next week. Forecasters have warned it will be an unusually busy season as climate change fuels more frequent and powerful storms.

Fiona’s winds peaked earlier this week at 130 mph, making it a Category 4 hurricane and the Atlantic’s strongest storm of 2022. It knocked out power across all of Puerto Rico Sunday and caused outages, floods and landslides on the Dominican Republic Monday as it moved north. The storm took a swipe at Bermuda Friday before bearing down on Canada.

By mid-morning, the storm had moved into the Gulf of St. Lawrence and was losing power, said Adam Douty, a meteorologist at commercial-forecaster AccuWeather Inc. “The worst impacts are likely over,” he said.

Fiona could cause between $1 billion to $1.5 billion in damage in Canada, based on its current forecast, said Chuck Watson, a disaster modeler with Enki Research.

The storm in the Caribbean is on track to pass just west of Havana and strike Florida near Fort Myers. There is a chance the track will change, potentially shifting further west into the Gulf of Mexico. The storm’s current forecast keeps it away from offshore oil and natural gas production in the western Gulf.

The storm could cause about $12 billion in losses in western Florida and Cuba, Watson said. The damage could be particularly harsh for citrus growers, who are just about to start harvesting their crops.

(Updates with conditions across Atlantic Canada in fourth paragraph)