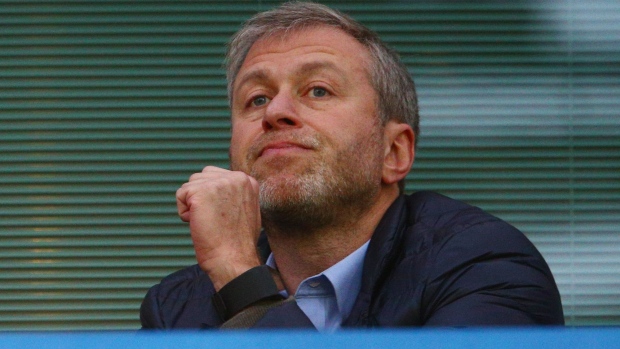 Roman Abramovich’s UK business empire stretched far beyond Chelsea Football Club. Among those who helped build it was an upstart firm with an illustrious name.

MC Peat & Co. played matchmaker on several deals over the past decade that paired Abramovich money with small UK firms and worked as a broker for at least three of the companies that the Russian billionaire backed.

The firm was set up in 2011, just as Michael Peat left his role as private secretary to Prince Charles and embarked on a new chapter after a career with the Royal household that won him a knighthood.

Michael Peat joined the board of Evraz Plc, Abramovich’s steel giant, in 2011 while his then 30-year-old son Charlie ran the new advisory firm.

Peat & Co. went on to arrange investments from Abramovich vehicles into an Oxford clean energy startup, the maker of a herbicide-free weedkiller and a company aiming to get diesel trucks to run on natural gas.

The Peats, descendants of one of the founding partners of accounting giant KPMG, are part of a lucrative cottage industry of well-connected Brits who offered assistance as the UK opened its doors to Russian wealth. But while a “lord on the board” has long been a common tactic among newcomers seeking status in the City of London, oligarch ties have gone from profitable to toxic as sanctions rained down after Russia invaded Ukraine.

Michael Peat, 72, in March resigned along with most of the firm’s directors after sanctions hit, having earned over $2 million for his 11 years of service.

Although Peat & Co.’s website previously said he helped found the firm and was an adviser, Charlie Peat says that wasn’t correct. His father “never had any interest, involvement or any role with the company,” Charlie told Bloomberg News.

From its early days, Peat & Co. formed some influential alliances. Eugene Shvidler, described as a “longstanding business partner” of Abramovich by the UK government when it sanctioned the businessman in March, and Andriy Shevchenko, the footballer signed by Chelsea after Abramovich purchased the club, became directors of Peat & Co.

Shvidler held the position for about a year, while Shevchenko remains in post, according to company filings. Valery Oyf, then chief executive of Highland Gold Mining Ltd,  a Russian mining company formerly backed by Abramovich, provided a loan to help with the startup costs of Peat & Co., its spokesman told Bloomberg News. In October 2012, Peat & Co. was appointed as a broker by Highland Gold.

The same year, AFC Energy, a developer of alkaline fuel cells listed on the UK’s AIM stock market for small companies, appointed Peat & Co. as a broker. The firm helped it raise almost £10 million ($13 million) from an investment vehicle Abramovich owned, according to a spokesman for AFC and regulatory filings.

After an education at Eton and Oxford, Michael Peat embarked on a career in the City, becoming a partner at Peat Marwick Mitchell, the forerunner to KPMG, in 1985. His name had resonance there as his great grandfather was a founding partner. The P stands for Peat.

Initially seconded to the Royal household to help reform its finances, Peat was asked to join, holding positions including Keeper of the Privy Purse and Treasurer to The Queen and finally Principal Private Secretary to The Prince of Wales. Those duties won him a knighthood, making him Sir Michael Peat.

Charlie followed in his father’s footsteps into the City, where he worked at Anglo-South African firm Investec, then Collins Stewart, a stockbroker, including going to Dubai to help build relationships with sovereign wealth funds.

Michael Peat, then 61, stepped down as a courtier in 2011. Among the handful of private sector jobs he took up was senior independent director of Evraz, in which Abramovich was a substantial shareholder, as it prepared to float on the London Stock Exchange.

Meanwhile, Charlie Peat built up relationships with Abramovich’s circle, including with Oyf, a Peat & Co. spokesman said. That connection came via Oyf’s company Highland Gold, which Peat was introduced to by Fleming Family & Partners, a family office run by relatives of James Bond creator Ian Fleming.

The younger Peat also played golf with Shevchenko and socialized with Michael Matlin, an American businessman who has helped Abramovich invest in hedge funds, a Peat & Co. spokesman said.

Peat & Co. was set up with the goal of introducing investors to small, fast-growing companies. Aside from its work for wealthy Russians, it has advised other businesses, including an Indian infrastructure fund and green technology company Auhua Clean Energy, according to regulatory filings.

The arrangement was successful. Nearly every year since its inception, Peat & Co. banked hundreds of thousands of pounds in profits from its advisory work, which appears to have mainly gone to Charlie Peat, who has significant ownership control of the business, according to its filings.

Four years after setting up Peat & Co., father and son eyed new opportunities and created a property investment firm called The Regeneration Group. Michael Peat was chairman of the venture with Charlie as head of capital markets.

The Abramovich connections resurfaced. Shevchenko became a shareholder. Matlin, who runs investment consultancy Concord Management LLC, joined as a non-executive director. Another executive who used to work for Abramovich’s family office also worked as a consultant for the firm.

The group was seeking large acquisitions including the purchase of Hyde Park Barracks, people familiar with the matter said who did not want to be identified because the plans were private. But it struggled to raise financing for the desired large-scale projects, the people said. The Regeneration Group still has a website, but the firm’s most recent filings show net assets of £1.

In 2018, a crackdown by the UK on wealthy Russians obtaining citizenship meant Abramovich faced delays renewing his British visa. He received Israeli citizenship and began unwinding his stakes in UK investments including AFC Energy and Highland Gold in 2020. Peat & Co.’s Russia business cooled and the firm focused more on UK investors.

Russia’s invasion of Ukraine in March triggered a raft of tougher measures, including the sanctioning of Abramovich by the UK and the sale of Chelsea. Michael Peat and other non-executive directors resigned from the Evraz board. Abramovich transferred ownership of at least some of his remaining UK assets to people close to him. At least one business which was advised by Peat & Co. recently consulted lawyers to understand the impact of having a sanctioned shareholder, a person familiar with the matter said who declined to be identified because the situation was private.

Charlie continues to run Peat & Co. from an office address a short walk from Buckingham Palace.