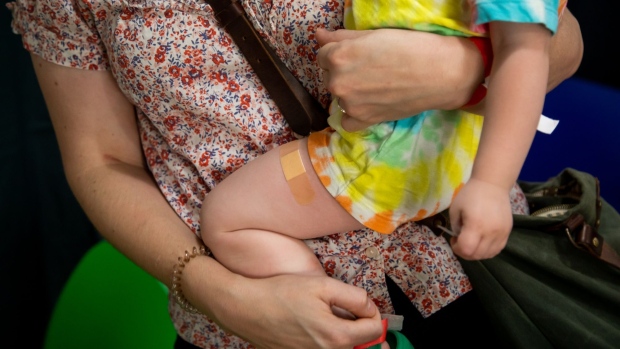 A 1 year-old child wears a band-aid after receiving a dose of the Moderna Covid-19 vaccine at the Brooklyn Children's Museum vaccination site, serving children six months to 5-Years old, in the Brooklyn borough of New York, US, on Thursday, June 23, 2022. Covid-19 vaccines for children under 5 years old were authorized by the US Food and Drug Administration on Friday and by the Centers for Disease Control and Prevention on Saturday, a welcome relief to parents of the last age group to become eligible for shots. Photographer: Michael Nagle/Bloomberg , Bloomberg

(Bloomberg) -- US health officials are struggling to address flagging influenza vaccination rates among kids that appear slowed primarily by decreases among White children.

While flu immunizations fell among White children from their levels a year ago, those among Black and Hispanic kids rose during the same time, according to the US Centers for Disease Control and Prevention. Meanwhile, two more children died of the disease this week, bringing the season’s total to 14, CDC Director Rochelle Walensky said Monday on a call with reporters.

“I know everyone’s tired of getting shots,” Sandra Fryhofer, board chair of the American Medical Association, said in the briefing. “We all have booster fatigue. But understand. You could get really, really sick this year and ruin your holiday celebrations if you don’t get vaccinated.”

The flu season continues to worsen, officials said, just days after the agency reported the highest level of flu-related hospitalizations in more than a decade. There are 47 US jurisdictions reporting high or very high levels of influenza-like illness, up from 36 last week, Walensky said.

“This rise in cases and hospitalizations is especially worrisome as we move into the winter months when more people are assembling indoors with less ventilation, and as we approach the holiday season where many are gathering with loved ones across multiple generations,” she said.

Vaccine uptake among all US children fell 4.8% below pre-pandemic levels, according to CDC data from late-November. Flu vaccination rates among White children are down 3.4% from last November and more than 7% below pre-pandemic levels, according to the CDC. Rates increased 8.7% from last November among Black children and rose 4.5% over the same time period in Hispanic children, yet are still slightly lower than before the pandemic began.

Flu tends to arise in the Northern Hemisphere’s winter, when air becomes cooler and drier, while activities move indoors where viruses can spread more easily. This year’s harsh flu season may be due in part to reduced immunity in the population after lower exposure to viruses during the pandemic, due to mitigation measures such as masking and social distancing.

Flu can be deadly, with estimated 5,000 deaths occurring last year, according to the CDC. However, typical seaons are far more deadly, with an estimated 25,000 deaths in the 2018-2019 season. Young kids and older adults face a higher risk of developing complications from the disease than younger adults.

The Biden administration’s efforts to promoted Covid boosters have also been largely disappointing. Just 12.7% of Americans 5 and older have received the updated bivalent booster shots.