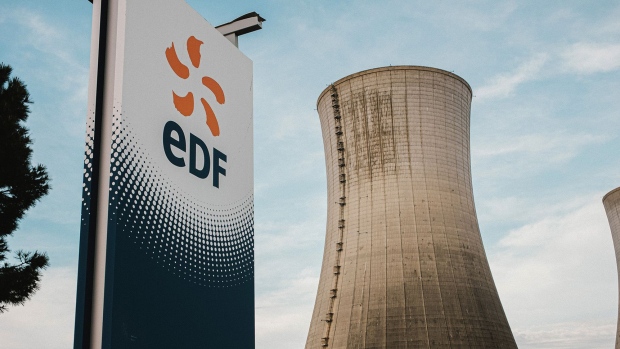 (Bloomberg) -- The French government pressured Electricite de France SA to meet its target to restart 32 nuclear reactors within months and reiterated calls for businesses and households to cut energy use to avoid winter shortages.

With a majority of its 56 French reactors offline for maintenance and repairs, EDF’s woes are exacerbating Europe’s worst energy crisis in 50 years with the prospect of domestic power shortages as Russia crimps natural gas shipments to the region.

The energy crisis is forcing governments across the continent to spend tens of billions of euros to shield consumers and businesses from surging bills, and to make contingency plans in the event of energy shortages during the coldest months of the year.

““EDF has pledged to restart all the reactors for this winter,” Energy Transition Minister Agnes Pannier-Runacher said in Paris after a cabinet meeting focused on the crisis Friday. “We are following the situation closely with weekly updates and we’re particularly vigilant over maintaining this calendar.”

EDF is under heightened scrutiny after missing self-imposed deadlines for reactor restarts. Its French nuclear output is set to drop to the lowest in more than three decades as it had to make unplanned checks and repairs on a dozen of reactors on top of a heavy schedule of regular maintenance and refueling halts.

The company also has kept a handful of reactors offline in recent weeks as a reserve for winter.

The French minister urged businesses, local governments, and the administration to improve plans and share best practices to cut energy use, which would make unwanted cutoffs less likely. Reducing heating and unnecessary lighting are among the most efficient measures, she said.

France, Germany and Spain will have to reinforce electricity and gas trading this winter, Pannier-Runacher said. France’s gas-storage capacity is 92% full, she said.