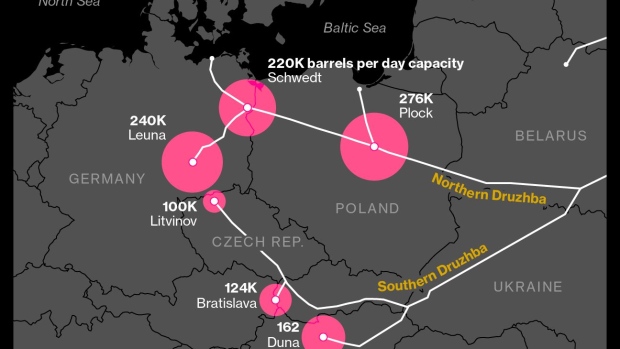 Robert Habeck, Germany's economy and climate minister, during a news conference in Berlin, Germany, on Wednesday, April 6, 2022. Habeck said it would be "a logical step" to back up the political decision to reduce Russian coal dependency by including a Russian coal import embargo in a European Union sanctions package "at some point". , Bloomberg

(Bloomberg) -- Economy Minister Robert Habeck said Germany has already cut its reliance on Russian oil enough to make a full embargo “manageable,” potentially laying the groundwork for a continent-wide ban that would upend the global trade in petroleum.

The share of Russian oil in Germany’s imports has fallen to about 12%, from 35% before the invasion of Ukraine, Habeck said Tuesday at a news conference in Warsaw.

The remarks come as U.S. and European officials discuss steps the European Union could take to restrict oil imports from Russia and cut the income that Moscow makes from sales.

He said that he hoped that replacing the Russian oil feeding the refinery at Schwedt in northeastern Germany -- which is part-owned by Rosneft PJSC and accounts for the remaining 12% of Russian oil imports -- could be achieved “in a matter of days.”

“The problem that seemed very large for Germany only a few weeks ago has become much smaller,” Habeck, who is also vice chancellor in the ruling coalition in Berlin, told reporters. “Germany has come very, very close to independence from Russian oil imports.”

Before the war in Ukraine broke out at the end of February, the Schwedt and Leuna refineries in eastern Germany processed about half a million barrels a day of crude oil, the vast majority of it originating in Russia.

Schwedt supplies 90% of the gasoline, jet fuel, diesel and heating oil consumed in Berlin and Brandenburg, according to the refinery’s website. Leuna is the primary supplier of fuels to the Thuringia, Saxony and Saxony-Anhalt regions -- including the cities of Dresden and Leipzig.

Habeck said the government plans to top up the two refineries with reserves from western Germany as it pushes ahead with the effort to achieve complete independence from Russian oil as soon as possible. The Leuna refinery had already managed to find alternative suppliers, he said.

As part of a wider effort to stop buying Russian energy, Germany has signed up to a European Union-coordinated embargo on the nation’s coal, and is expanding LNG capacity to help cut reliance on its gas. A deputy foreign minister said last week that Germany is aiming to end Russian gas purchases “during 2024” and oil imports by the end of the year at the latest.

The options discussed between U.S. and European officials included a ban, a price cap and a payment mechanism to withhold revenue that Russia’s generated since the start of the war in Ukraine, Bloomberg reported last week.

Speaking alongside Habeck on Tuesday, Polish Environment Minister Anna Moskwa said that the government in Warsaw is ready to join EU partners in ending energy imports from Russia.

“We appreciate the gesture in the form of a coal embargo, and we expect an embargo on other Russian resources without undue delay -- here and now,” she added.