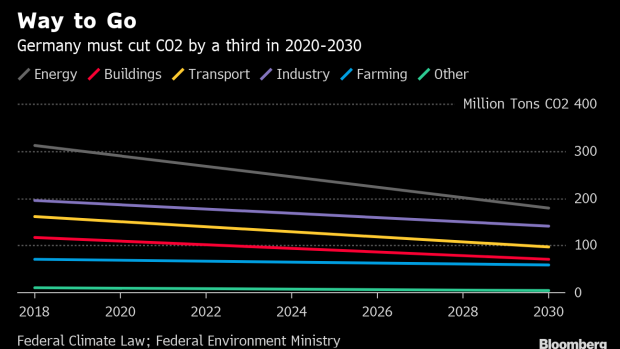 BERLIN, GERMANY - JUNE 05: Bicyclists cross an intersection as cars wait at a red light in the city center on June 5, 2018 in Berlin, Germany. Bicycles are a popular alternative to other forms of transportation in Berlin, though their use depends on warm and dry weather, which in Berlin, with its long, wet fall and winter, is often rare. (Photo by Sean Gallup/Getty Images) , Getty Images

(Bloomberg) -- Germany is preparing to impose a cap-and-trade system on carbon emissions from the heating and transport sectors, raising the cost of driving.

The program that Chancellor Angela Merkel’s coalition is considering would require oil companies to buy allowances costing 30 euros to 50 euros ($33 to $55) for each ton of carbon dioxide their fuels emit, according to officials familiar with the discussions who. They asked not to be named before the information is public.

It’s aimed at bringing a more rapid reduction in greenhouse gases across Germany, which is on track to miss targets it set under the 2015 Paris Agreement on climate change. Gasoline and diesel distributors led by BP Plc and Royal Dutch Shell Plc would be required to record the carbon content of their sales and buy allowances. Those costs would trickle down to what consumers pay at the pump.

“It’s clear that the price of fuel needs to increase,” said Constanze Haug, a senior manager at the Berlin-based research group Adelphi who has advised the environment ministry on climate policy. “If the carbon price corridor isn’t smartly designed, it could erode support for climate policy.”

The program would add costs above the prevailing price in the European Union Emissions Trading System, which averaged less than 24 euros in the past year. That system applies to power generators and some industrial plants but not heat or transport.

Merkel has no choice but to introduce stricter limits on greenhouse gases coming from transport, which accounts for 20% the nation’s total emissions and has increased every year since 2012. Adding to fuel costs would prod drivers toward buying more efficient vehicles and embracing electric cars, which have been slow to sell so far.

About 480,000 electric and hybrid vehicles are on the road in Germany, well short of the target of 6 million that Merkel has set for 2030.

Germany’s effort to expand carbon pricing to sectors not covered by the EU ETS draws on California’s experience in reining in tailpipe pollution. Germany, like California, would require fuel distributors to report sales for the purpose of monitoring pollution.

The floor price in Germany would be set at roughly double what California charges. Another difference is the most-populous U.S. state uses low-carbon fuel standards and measurements of the carbon-intensity of oil processed into fuels to capture pollution from the life-cycle of a barrel of oil.

Germany’s move would be a landmark in the development of carbon trading, which was enshrined in the 1997 Kyoto Protocol as a tool for reining in emissions. The existing EU ETS got underway in 2005, with allowances hitting as much as 31 euros in 2006.

Prices lingered under 20 euros for much of the past decade until EU leaders agreed on a way to recalibrate supplies of permits arriving in the system. More recently, rising costs of carbon have prodded utilities to switch away from coal toward cleaner-burning natural gas.

“It would be exciting to have an extension of carbon trading,” said Ingo Ramming, head of corporate and investor solutions at Commerzbank AG in Frankfurt, who’s tracked the EU market for more than a decade. “The carbon price will ensure that greenhouse gases are reduced where it’s most cost-efficient.”

This week, Merkel’s Christian Democrats are seeking to strike a common position with their coalition partners, the Social Democrats, on how to make deeper cuts in emissions. An agreement is due at a cabinet meeting set for Friday.

Exactly what level of pricing isn’t decided, but after a few years at a fixed rate, Germany’s plan is likely to include California-style floors and ceiling prices. The corridor will help provide predictability for the system while protecting consumers from an unexpected surge that market forces might bring.

It’s still possible that lawmakers opt for a tax instead of expanding the cap-and-trade system. The government may make temporary adjustments to existing energy taxes in the next few years while the new system is being set up.

Merkel has little choice but to clamp down on transport and heating, since her target is to cut CO2 output at least 55% by 2030 from 1990 levels. That will require the nation to shave 100 million tons of CO2 from the two sectors combined within a decade.

Upstream oil and gas companies would be required to join the system, which may take three years to set up, according to the officials. Prices of allowances may be allowed to reach 200 euros a ton by 2030, they said.

Other European nations are watching Germany’s work to see how they can introduce limits to their own transport sectors.

“We need to act not when and if the EU finds that solution, we need to act now,” said Dan Joergensen, minister of climate and energy in Denmark, in an interview in Copenhagen. He said his nation is considering tax changes and electric vehicle incentives to curb transport emissions.

Germany may introduce other measures in addition to the extension of carbon trading. Coalition experts are considering a temporary adjustment of the nation’s energy tax system, which would include adding a CO2 premium on top of other levies to give an incentive for a switch to cleaner energy, said the officials.

The fuels industry has signaled support for carbon pricing, favoring burden shifting in the tax system. Earlier this month, the sector lobby group NWV called for Germany to reorganize its fuel taxes in a way that would encourage cleaner fuels without forcing customers to bear the brunt of the changes.

“This model would create a strong and at the same time socially acceptable CO2 price signal in the short term,” MWV Chief Executive Officer Christian Kuchen said in a statement. Members of the lobby group include units of Exxon Mobil Corp. and Royal Dutch Shell Plc.

Climate and Economy Are Top Issues in EU

To contact the reporters on this story: Mathew Carr in London at m.carr@bloomberg.net;Brian Parkin in Berlin at bparkin@bloomberg.net;Vanessa Dezem in Frankfurt at vdezem@bloomberg.net