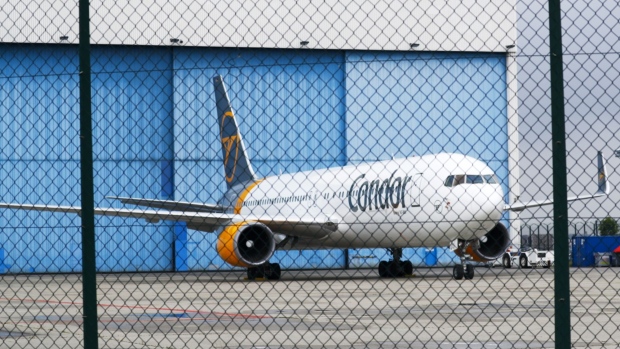 German airline Condor will cut about 15% to 25% of its staff in an attempt to slash operating costs amid the ongoing coronavirus crisis, Chief Executive Office Ralf Teckentrup told Frankfurter Allgemeine Sonntagszeitung.

The carrier formerly owned by failed travel firm Thomas Cook Group Plc plans to shed “between 650 and 1,000 jobs,” a move Teckentrup said was in line with measures put in place by the competition. Protective shield proceedings adopted before the Covid-19 crisis hit will probably last until the end of September, he said.

The company also plans a move to smaller headquarters, which Teckentrup said he hopes will save about 1 million euros ($1.1 million) per month. “We no longer need room for employees who worked for our former parent, Thomas Cook,” he told the newspaper. “In addition, about 10% to 15% of our colleagues will work in the home office on a permanent basis.”

Condor has been bailed out by the German government twice, with a state-guaranteed loan of 550 million euros winning European Union approval in April. Teckentrup said the crisis in the airline industry will likely endure until 2024.

LOT Polish Airlines abandoned a planned takeover of the holiday carrier in the midst of the pandemic. Asked about his expectations for a new buyer, Teckentrup said, “in the current crisis nobody is thinking about takeovers.”

A new sales process probably won’t start until the end of next year at the earliest, he said. Lufthansa would be an attractive buyer, according to Teckentrup, adding the cartel office would be very critical. “I would even give LOT a second chance,” he said.