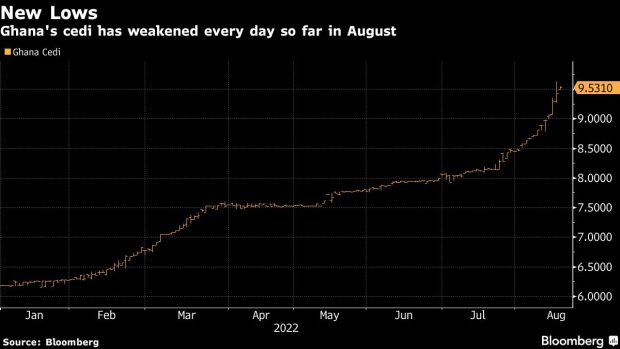 The Bank of Ghana stands in Accra, Ghana, on Monday, Sept. 21, 2018. Ghana’s central bank maintained its benchmark interest rate at a 4 1/2-year low for a second straight meeting as inflation reached the top end of its target band. , Bloomberg

(Bloomberg) -- Ghana’s central bank increased its benchmark interest rate by the biggest margin on record. That may not be enough to support its slumping currency as investors await a loan from the International Monetary Fund.

Policy makers late on Wednesday raised the rate by 300 basis points to 22%, the biggest increment since 2002, when the central bank was granted the independence to set interest rates. The bigger-than-expected hike adds to the 550 basis points of increases since November.

The yield on Ghanaian dollar bonds maturing in 2032 climbed for a fifth consecutive day on Thursday, rising five basis points to 21.24% by 7:37 a.m. in Accra, the capital. The premium investors demand over US Treasuries to hold Ghana’s debt currently stands at about 1,880 basis points, according to JPMorgan Chase & Co. indexes, effectively locking the world’s second-biggest cocoa producer out of the eurobond market.

In addition to the rate hike, the Bank of Ghana will gradually increase the primary reserve requirement of banks. It also announced measures to boost foreign-exchange reserves and support the cedi. The currency has declined 36% so far this year and is the world’s second-worst performer, after Sri Lanka’s rupee.

The central bank will “work collaboratively” with mining and international oil companies to buy all foreign exchange generated by their voluntary repatriation of export proceeds, according to the statement. It didn’t provide further details.

In a nation that’s been priced out of the global financial markets and has been buffeted by accelerating inflation, a widening budget deficit and rating downgrades, the latest measures may be insufficient to support the currency, according to Goldman Sachs Group Inc.

Ghana’s gross reserves may decline below $6 billion by year-end, Goldman Sachs economists Bojosi Morule and Andrew Matheny said in a note to clients on Wednesday. A drop to that level would make the conclusion of IMF-program talks “crucial for the balance of payments,” they said.

Gross reserves totaled $7.7 billion at the end of June, according to data compiled by Bloomberg.

The central bank held its key rate last month after Governor Ernest Addison said there were signs that rampant inflation may be leveling off. However, regulators announced Monday that water and electricity tariffs will rise 22% and 27% respectively from next month. And producer prices in July jumped 41%, the fastest pace in eight years, adding to a deteriorating inflation outlook.

Annual inflation at 31.7% is at its highest level since November 2003, having exceeded the top of the central bank’s target band of 6% to 10% for 11 months. Rising costs have been fueled by surging international commodity prices and the sharp depreciation in the cedi.

Ghana turned to the IMF in July for a credit facility in a bid to help anchor price stability and fund its economic program. In the absence of market access and faced with “constrained” domestic funding, the government has turned to the central bank for support, the regulator said.

The overdaft has “helped close the financing gap as reflected in the mid-year budget review,” it said in the statement. “The Bank of Ghana is working with the Ministry of Finance to agree on a cap on the overdraft.”

The central bank is the second in Africa after Uganda to call an emergency MPC meeting since Russia’s invasion of Ukraine to halt a slide in its currency and contain price increases. Russia, Kazakhstan and India have also held special meetings.