We should have inoculated those most at risk, in hotspots faster: UHN CEO

​The renewed surge in COVID-19 infections is threatening to further divide the world economy between the rich and poor, potentially damaging overall global growth if the fresh outbreaks spread or if key sources of demand falter.

More people were diagnosed with COVID-19 last week than any other since the pandemic began. The World Health Organization this week warned that new infections are increasing everywhere except Europe, led by rocketing numbers in India with cases also rising in Argentina, Turkey and Brazil.

That’s casting a shadow over a previously vigorous global economic rebound given that failure to control the virus or get vaccines distributed evenly risks driving new mutations, first in emerging markets and then on to developed nations that had been beating the pandemic back.

Even if that doesn’t happen, a two-speed recovery will restrain even inoculated countries by limiting foreign demand for their goods and destabilizing supply chains. The International Monetary Fund said last month that the recovery will miss out on a US$9 trillion bump by 2025 unless faster progress is made in ending the health crisis.

Emerging and developing economies accounted for two thirds of global growth before the pandemic and around 86 per cent of the world’s population. The World Bank told them just this week that they must prepare for the possibility of their recoveries losing steam. A nascent economic revival in India -- the world’s sixth largest economy -- is being threatened by renewed movement curbs across provinces to stem a new wave of infections that have topped 200,000 daily for the last week.

“The new case spikes represent a reality check for the world economy as it is clear that the pandemic is nowhere close to being over,” said Tuuli McCully, head of Asia Pacific economics at Scotiabank. “Many lower-income economies continue to face severe COVID-19 related challenges and have a long road ahead before they are back to ‘normalcy.’”

Healthcare workers prepare to administer COVID-19 vaccines to residents at a vaccination site in Richmond, California, on April 15.

More than 944 million vaccinations have been administered across 170 countries, according to data collected by Bloomberg -- enough doses for 6.2 per cent of the global population. But the distribution is lopsided with the highest income countries getting vaccinated about 25 times faster than those with the lowest.

“I see it as a race between virus mutations and vaccine rollout,” said Rob Subbaraman, head of global markets research at Nomura Holdings Inc. “Many people are not aware that while the 1918 Spanish flu is believed to have started in the U.S. and then spread to Europe, in the end the countries that suffered most were in emerging markets. It’s an ominous sign of history repeating itself.” 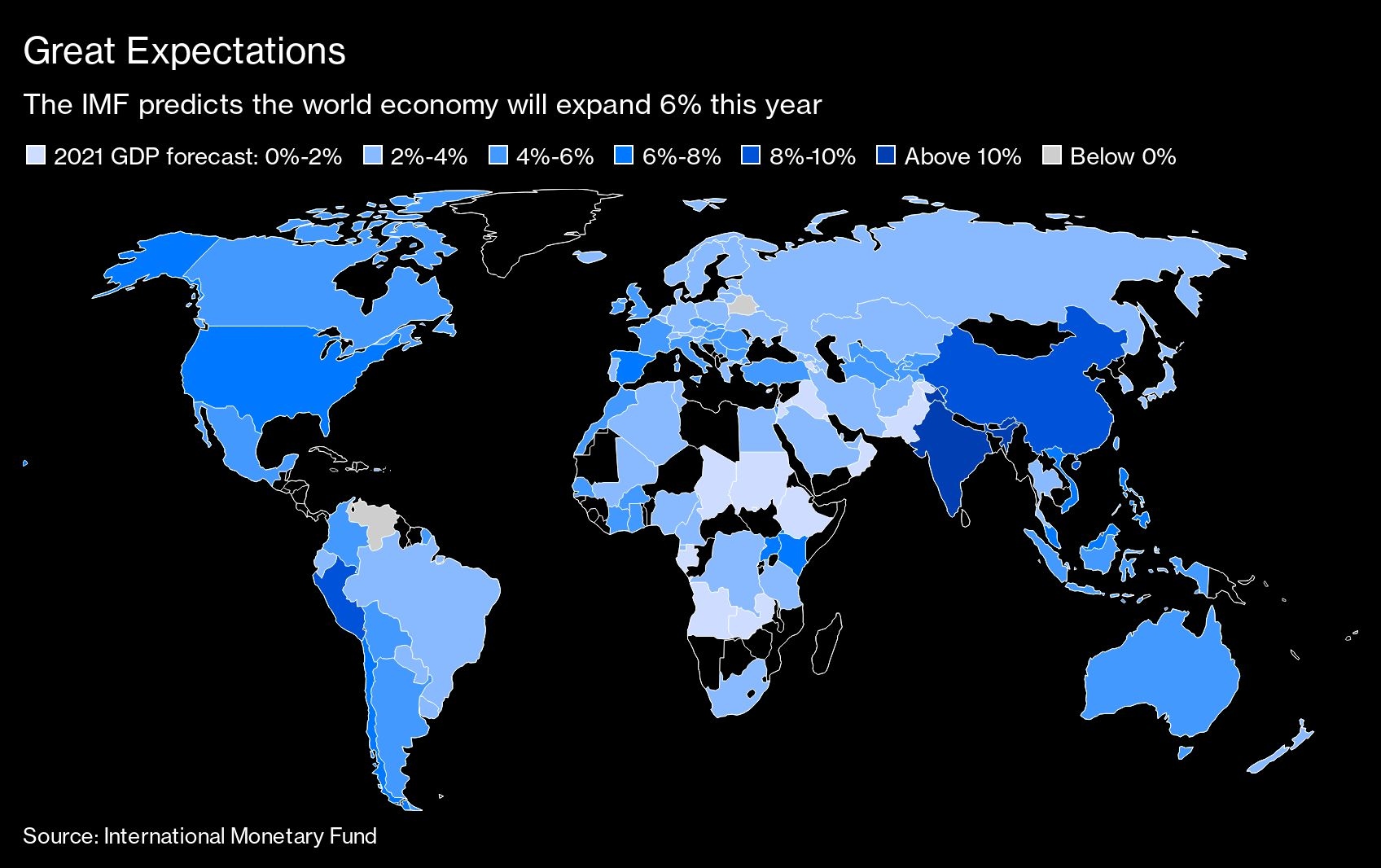 Markets are showing signs of jitters. A gauge of stocks in Asia has lagged global peers this month, while the Indian rupee is this week’s worst-performing currency in the region. Investors have sought out traditional havens like the Japanese yen, and rewarded those with better track records of managing the outbreak such as the Israeli shekel, Taiwanese dollar and the British pound.

Companies most reliant on a reopening of the global economy are especially vulnerable and the latest infection surge is overshadowing a “priced to perfection re-open trade,” Stephen Innes, chief global market strategist at Axicorp Financial Services Pty Ltd. in Sydney, wrote in a note to clients.

Nestle SA, the world’s largest food company, said in a statement on Thursday that “there is an urgent need to advance equitable access of vaccines, particularly in low-income countries.” The Swiss firm pledged more than 6 million francs (US$6.6 million) to accelerate the delivery of shots to underserved communities.

“The glaring problem is that despite strenuous efforts by the medical community around the globe, we are not even close to calling it a day so that people can start again or continue with things more productively,” according to Innes.

The spread of cases threatens what’s forecast to be a V-shaped recovery for global growth, led by the U.S. and China. The IMF currently expects the world economy to grow 6 per cent this year, the most in four decades of data. But it knows the longer the pandemic runs the harder it will be to meet that forecast.

“The window of opportunity is closing fast,” Managing Director Kristalina Georgieva said. “The longer it takes to speed up vaccine production and rollout, the harder it will be to achieve these gains.”

The IMF modeled a downside scenario in which supply bottlenecks in vaccine supply and other logistical problems allow existing virus variants to become entrenched and new mutations to occur, leading to delays for reaching herd immunity of six months in advanced economies and nine months in emerging markets.

Under such a scenario -- with persistently high infection rates and deaths slowing the normalization of mobility -- global growth could be 1.5 percentage points less than in the base case scenario in 2021 and a further 1 percentage point below the baseline in 2022.

The pace of vaccinations over coming months and their ability to withstand new variants will dictate the recovery from here, according to Ben Emons, managing director of global macro strategy at Medley Global Advisors in New York.

“It will take most of the second quarter to get visibility if the global roll out is truly succeeding against the variants,” Emons said.