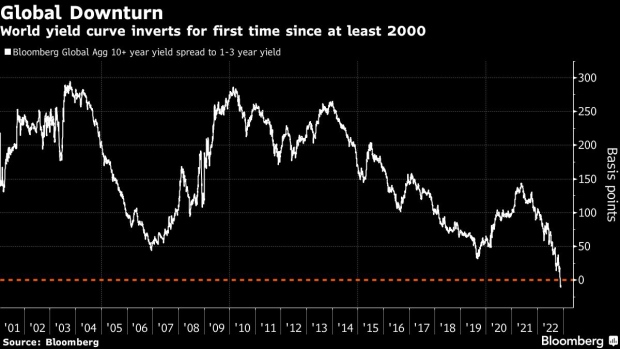 A pedestrian passes in front of a tube releasing a cloud of steam near the New York Stock Exchange (NYSE) in New York, U.S., on Monday, Jan. 7, 2019. U.S. stocks climbed following last week's rally with investors piling into small-capitalization stocks amid the resumption of trade talks with China. Photographer: Michael Nagle/Bloomberg , Bloomberg

(Bloomberg) -- Global bonds joined US peers in signaling a recession, with a gauge measuring the worldwide yield curve inverting for the first time in at least two decades.

The average yield on sovereign debt maturing in 10 years or more has fallen below that of securities due in one-to-three years, according to Bloomberg Global Aggregate bond sub-indexes. That has never happened before based on data going back to the beginning of the millennium.

The inversion of the yield curve is typically seen to herald a recession, as investors switch money to longer-term bonds due to pessimism over the economic outlook. Those fears are growing as policy makers around the world pledge further monetary tightening to tame rising consumer prices.

“Central bankers paralyzed by inflation fears will keep cash rates anchored in the restrictive zone for longer,” said Prashant Newnaha, a rates strategist at TD Securities Inc. in Singapore. “This will be a key catalyst for ongoing curve flattening.”

Germany may already be in recession, while the US is likely to enter one by the middle of next year, according to Deutsche Bank AG strategists led by group chief economist David Folkerts-Landau in London.

The global yield curve inversion comes as bonds enjoy a rebound rally on prospects that a slowing economy will spur policy makers to slow or even halt rate hikes. The Global Aggregate index has gained 5% in November, heading for its biggest monthly gain since 2008.

US long-dated Treasury yields on Tuesday remained near lows struck in early October with the yield curve near its most inverted levels in decades. The Treasury curve steepened modestly as companies sought to sell bonds with longer maturities. Ahead of deals pricing, Treasuries tend to cheapen from rate locking.

--With assistance from Michael MacKenzie and Cormac Mullen.

(Updates with details on US Treasuries in final paragraph)