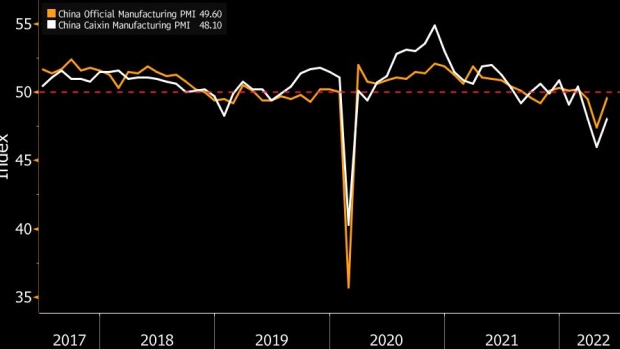 (Bloomberg) -- China’s effort to stabilize its coal market will meet its biggest test so far this year as a heat wave grips the country and power consumption hits record levels across many northern and central provinces.

The air-conditioning has been switched on just as industrial demand for electricity revives after the reopening of Shanghai and easing of virus curbs elsewhere in the country. According to Fengkuang Coal Logistics, the power grid in the major coal-consuming province of Jiangsu dispatched more than 100 million kilowatts of electricity for the first time this summer on June 17 -- nineteen days ahead of last year’s pace.

Generators are effectively on the hook for a couple of related promises made by China’s leadership: that power shortfalls won’t be allowed to cause factory shutdowns like they did in 2021, and that this year’s economic growth target -- thought by many to be out of reach -- will be met.

There won’t be a repeat of last year’s massive power crunch, but there’s still likely to be supply tightness when demand is heavy, Wang Yixuan, an official at the China Electricity Council, told state broadcaster CCTV on Sunday.

Extreme weather continues to afflict the nation, China has issued drought alerts for Inner Mongolia, Henan, Shaanxi and Gansu due to persistent dry weather, according to the Ministry of Water Resources. In contrast, southern provinces are still suffering heavy rainfall, which is constraining construction and industrial activity.

While China’s economy improved somewhat in June, the recovery remained muted, according to early indicators tracked by Bloomberg. The factory PMIs due at the end of the week are likely to have returned to expansion, while restrictions on public contact will have continued to impede services.