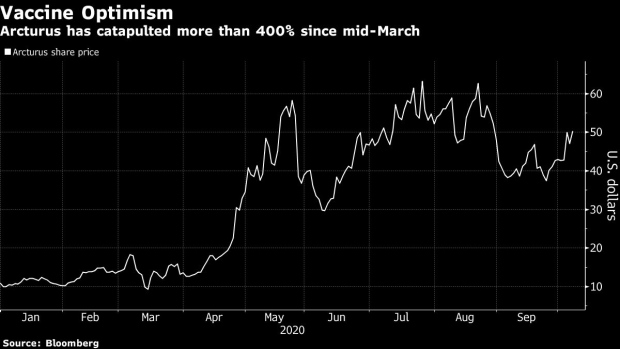 (Bloomberg) -- Two-and-a-half years ago Joseph Payne was ousted from Arcturus Therapeutics Holdings Inc., the biotech company he helped found, by what he calls a “dysfunctional board.” Four months later he was back at the helm and the now $1.2 billion firm is racing to push out a Covid-19 vaccine alongside the world’s leading contenders.

The contentious transfer of power came after the previously private Arcturus gained access to the public markets in a reverse merger with Alcobra, a struggling biotech. Today, Arcturus’s goal is to develop a potent low-dose one-shot messenger RNA Covid-19 inoculation.

Like other vaccine and drug developers chasing Covid medicines, Payne’s company has picked up steam since mid-March when U.S. states started shutting down. The shares have surged more than fivefold since then and climbed as much as 6.3% in Thursday trading.

Hedge funds have taken notice, with actively managed firms making up 20% of the company’s holder base as of Oct. 4. Pure play health fund HealthCor Management LP has a 6.5% stake after adding almost 1.5 million shares in the third quarter, according to data compiled by Bloomberg.

Arcturus kicked off a dose-finding study in Singapore in August and has clinched supply deals with the governments of Israel and Singapore. It wasn’t among the few companies singled out for the Trump administration’s Operation Warp Speed and it hasn’t signed any large-scale government contracts. But Payne, the company’s president and chief executive officer, sees this as an advantage.

The San Diego-based company’s stratospheric rise has also drawn the interest of short sellers. About $129 million of the stock is shorted, or roughly 13% of the public float. Before the pandemic, bearish bets against the company accounted for less than 2% of the float, according to data from financial analytics firm S3 Partners.

This may be because Arcturus is the underdog in a race led by behemoth drugmakers Pfizer Inc. and AstraZeneca Plc, as well as former upstart biotech, Moderna Inc., which has seen its valuation swell to $29 billion.

The first look at Arcturus’s shot, dubbed ARCT-021, is expected in the fourth quarter. Arcturus still has to show that its shot won’t require a booster and it likely won’t be the first to get a one-shot vaccine to market either. Johnson & Johnson started a 60,000-person study in September while Merck & Co. is also pursuing single-shot inoculations.

Vaccine front-runners Pfizer and its German partner BioNTech SE are widely expected to have the first late-stage data in the U.S. for an experimental vaccine this month.

“What the world is starting to understand is the race is not just for approval, but availability and accessibility,” Payne said.

Arcturus isn’t competing directly with Pfizer and J&J either.

“Countries around the world have to stand in line behind these other large countries like the U.S. or the U.K. if they want access to an RNA vaccine,” Payne said. This is where Arcturus would step in and offer investors value, he said.

ARCT-021 uses RNA, but via proprietary technology that delivers a self-replicating RNA payload directly into cells. Arcturus’s vaccines may be protective and longer lasting at much lower doses compared to the leading shots. A lower dose, single-shot regimen that could be stored at regular refrigeration temperatures, would ease many hurdles to making a vaccine widely available, according to Payne.

To that end, the company has also inked pacts with contract manufacturers Catalent Inc. and Sweden’s Recipharm AB.

Payne understands the limitations of the company’s scope and says a partnership with a “reputable large pharma” to commercialize and distribute shots may also be in Arcturus’s future.

He also offers holders one assurance: He’s keeping his investment where it is.

“I’m all in,” said Payne, who is Arcturus’s fourth-largest shareholder. “I haven’t sold any shares since inception of the company and I don’t intend on selling any shares.”