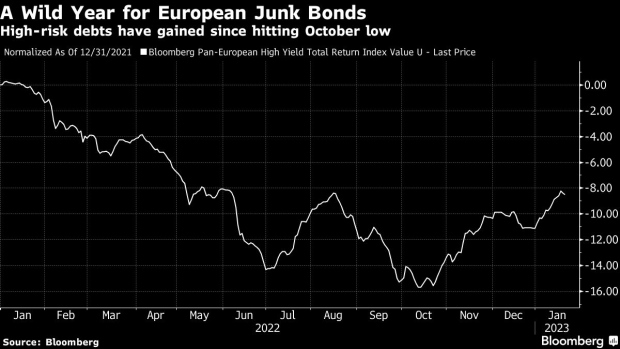 (Bloomberg) -- Hamza Lemssouguer and Sofiane Gharred, two of the most closely-followed credit traders in Europe, guided their hedge funds to gains in 2022 after recovering from double-digit declines earlier in the year.

The Arini Credit Master Fund, run by former Credit Suisse Group AG trader Lemssouguer, ended the year up 5.7%, according to people with knowledge of the matter. Gharred’s flagship credit strategy at Selwood Asset Management made 0.14%, one of the people said, asking not to be identified because the details are private.

The gains represent a turnaround for both funds in the closing stages of the year, aided by a calmer spell in the credit markets. Arini was down as much as 16% through September, while Selwood’s flagship fund declined 15% during the first half as short-term credit spreads jumped, Bloomberg reported earlier.

The average credit hedge fund lost 5% last year, according to data compiled by Bloomberg. The cost of insuring junk bonds against default started to fall from October after reaching two-year highs amid fears about a looming recession and rising energy costs.

Spokespeople for the two London-based traders declined to comment.

Lemssouguer, 32, was known for amassing large, risky bets on corporations at Zurich-based Credit Suisse before raising $1 billion to launch one of the largest credit hedge funds in recent years. He has since grown assets to $2.3 billion, one of the people said.

While the Arini fund holds most of these assets, Lemssouguer also manages several hundreds of millions of dollars in a portfolio of structured credit co-investments for some of his clients, which he started last May. That money pool is up 25% so far, the person added.

The firm is also the latest in a string of managers looking to launch a platform for collateralized loan obligations in Europe, according to people familiar with the matter. Sona Asset Management is also planning to issue CLOs in the near term, the credit hedge fund told investors earlier this month. Pacific Investment Management Co. is expected to issue CLOs in Europe for the first time in more than a decade.

Arini, meanwhile, added to its highest conviction positions over the course of the summer, taking advantage of the widespread withdrawal from European credit.

The price difference between safer and riskier junk-rated companies was at its widest since the height of the pandemic in the fourth quarter as money managers fretted about investing in companies seen as more vulnerable. Prices for the lowest-rated junk bonds have started to climb this year, according to data compiled by Bloomberg.

Selwood, which trades investment-grade credit in Europe and North America, was founded by Gharred more than seven years ago after his time as a partner at Chenavari Financial Group.