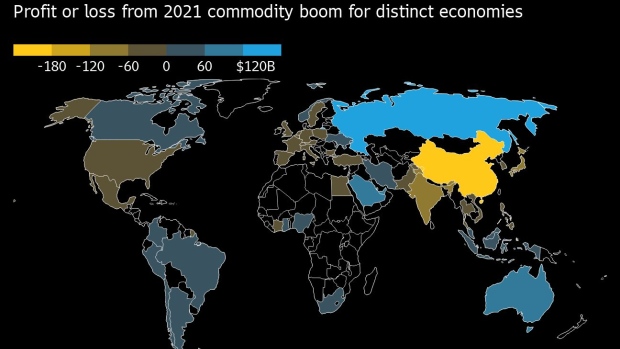 This year’s commodity boom will shift about $742 billion from importers like China and Europe to producers such as Russia, Saudi Arabia and the U.A.E., according to Bloomberg Economics.

“The pain will be felt the most by importers with relatively low incomes, such as Vietnam, Bangladesh and Thailand,” BE’s Ziad Daoud and Felipe Hernandez wrote in a research report Wednesday. “Egypt and Turkey will also see their import bill rise. The losses of Europe and China may be large in dollar terms, but remain contained relative to the size of the economy at less than 1% of GDP.”

Commodities from oil to copper and coffee have surged this year as major economies rebound from the coronavirus pandemic and supply-chain bottlenecks disrupt deliveries. Energy prices have been given an extra boost in recent weeks by shortages of natural gas and coal across much of Asia and Europe.

Daoud and Hernandez also highlighted that a likely 2022 interest rate hike in the U.S. could lead to capital flight from emerging markets. Turkey, Egypt, Brazil, Argentina and South Africa -- a group BE terms the BEASTs -- are the most vulnerable to such a scenario, they said.